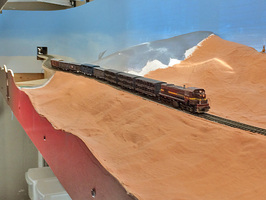 So with an open mind, after working my first shift job dispatching the St Joe South desk, I headed to Blair Kooistra's house to meet with him and Chris Atkins to give the Buggardine (pronounced bug-gar-deen) Branch a whirl.  I was not disappointed!  As always what Blair does is extraordinary!

Blair had prepared an introductory document explaining the basics of the railroad.  The information was presented in three categories: trains, engines, and operating conditions.  The "Intro to Buggardine" button in the heading above will take you to a page displaying that information.

The first train to enter the stage was a stock train with a lone locomotive and a guard van on the rear.  The train arrives from "up" (stage left) and drops into town.

This train was powered by a TrainOrama Model of New South Wales Government Railways (NSWGR) 47-Class locomotive No. 4716. After dropping off the train in Buggardine, the locomotive runs light to the engine track and is spun on the turntable before being tied down.

The next train on stage also arrived from up.  This train consists of 12 grain empties powered by two 48-Class locomotives, also TrainOrama Australian models.  NSWGR A.E. Goodwin, Auburn locomotives 4883 and 4858 do the honors.  These models were long-awaited (over six years in the making) and had just arrived.  Blair installed the sound decoders himself and they sounded amazing!

Buggardine sports a grain elevator served by a single track capable of holding 12 cars.  As the switch opens towards "up" the train has to be run around by the power on arrival and then spotted.  The cars are loaded at the elevator which is located mid-track.  During the loading process the cars roll down-hill toward the end of the track so a switch move is required half-way through the loading process whereby the first six cars loaded are pulled out, set aside, and the next six cars are re-spotted for loading.

The third act on stage is the local passenger train equipped with a New South Wales Government Railways 620/720 class Diesel Multiple Unit railcar.  This particular one is a very nice replica of cars 623/723 made by Eureka Models.  As with everything, this train arrives from up.  The local passenger train slides downhill into Buggardine and lands at the passenger depot at the same time the grain train is being spotted.

With the grain train power resting next to the turntable and the Diesel Multiple Unit passenger train at the depot, a mixed-freight train appears from up.  This train is led by a single 48-class locomotive, number 4867.  This train comes with a train list as all of the cars will need to be spotted to the proper locations on arrival.  Chris Atkins and I would spend some time working this job together, spotting the inbound cars (I mean wagons) and pulling the releases from various industries and team tracks for the outbound manifest train.

The inbound and outbound trains had their own switch lists.  Before some of the industries could be accessed, some freight on-hand had to depart Buggardine.  Blair went to the engine track and fired up the locomotive that had brought in the stock car train.  47-Class No. 4716 had been parked at the engine facility since its arrival.  He used it to retrieve the now loaded stock train as well as a few flat cars loaded with containers of cotton.

Having reached the scheduled departure time, the passenger train with Diesel Multiple Unit railcar set 623/723 departs town.  This movement opens a route out of town for the combined stock/cotton train to exit Buggardine.  Blair positions the guard van in town so that it can be placed on the rear of the departing stock/cotton combo train.  Once the moves are completed and the train is assembled it exits stage left to up.

Now with a little more room in town 48-Class locomotive No. 4867 sets about finishing all of the required rat-killing, spotting and pulling cars from various industries.  Like a game of chess, planning out several moves in advance is necessary to minimize double-handling cars while accomplishing the task at hand.

As the local mixed freight is working on the local industries, the grain train power heads towards the grain elevator to prepare that train for departure.  With both blocks of six cars loaded, the guard van is set aside so the grain cars can be doubled on top of it.  Switching and air test completed, the local freight leaves town for up.  Now only the grain train remains in Buggardine.

Blair invited me to bring one of my locomotives to this operating session.  So I did bring my T&GN C40-8 3149.  For fun we put it on the layout and tacked it to the head end of the grain train to lead the climb out of town.  Without any American rolling stock on the layout, it is difficult to gauge just how much smaller Australian locomotives and rolling stock are.  But wow, the C40-8 really dwarfed the two 48-class locomotives.  With all the power consisted together, this departure from Buggardine would be the final act of this play!

Thank you for the invite Blair.  The session was most enjoyable and I look forward to seeing how your railroad develops moving forward!

The buttons below will take you to various prototype and model railroad pages if interest that pertain to australian model railroading.