1st Slide Show - Adventures of NP Train No. 664
Dean Ferris hosted an operating session on his N-scale Northern Pacific "Proto-Freelanced" 1969 Northern Pacific joint line through eastern Oregon.  This railroad features joint operations with the Great Northern and sports run-through power of the Rio Grande, Santa Fe, Southern Pacific and Western Pacific in addition to NP and GN power.  The layout measures 28 feet by 25 feet with 275 feet of mainline and a minimum curve radius of 22 inches.  Siding turnouts are Atlas No. 10 switches and Atlas Code 55 rail is the norm. The ruling grade is 2.2% southbound from Dayville to the summit at Snowline.  The northbound grade from Silvies to Snowline is 1.8%. Heavy tonnage trains require manned helpers on both grades.  This railroad uses NCE radio-control DCC and the method of operation is Track Warrant.  Car tab markers are used on the car roofs for block/destination identification.
The south lead yard job being operated by Chris Atkins had to clear up for us on the south lead.  Train No. 664 was then instructed to pull into Track 1 and set out the Monument cars in Track 8.  Track 8 was clear and the Yard Job was on-spot to grab the cars from the south end as soon as the road power was cut away.  I was then instructed to tie onto the cars on Track 7 and add them to the head-end of train No. 664. 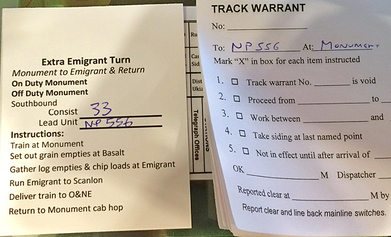 Before taking on my next assignment operating the Extra Emigrant Turn I was able to mingle and photograph a few of the trains out and running on the layout including NP Monument to Pasco train 660 (Paul Duncan), GN Salt Lake City to Portland passenger train No. 66 with SP&S equipment (Blair Kooistra), as well as Rio Grande Helper, UP to Centralia, WA coal train (Greg McComas).  This interlude was brief as I was directed to Monument Yard to report for duty.

I was assigned a pair of NP GP7's, Nos. 556 and 567, to handle the Extra Emigrant Turn.  GP7 556 sported roof-mounted air tanks.  I hostled my own power from the engine service tracks at Monument Yard to to lead where the yard job had spotted my train of empty grain boxcars.  All of these 40-foot boxcars are being repositioned for off-season storage.  I then doubled this train onto a green NP caboose and was ready to depart after completing the required tests.

The mainline was busy so the train dispatcher was unable to let me out for a while.  I made a shuffle move in the interim to allow a Great Northern transfer job to access Dayville yard.  Eventually I was issued a track warrant to proceed from Monument to Snowline with and "X" in Box 4--"Take siding at last named point."  The two GP7s handled the short train of empty boxcars nicely up the 2.2% grade to Snowline where we took siding to meet NP passenger train No. 8.  This train was an consist of locomotives and cars in the NP two-tone green scheme and was a reminder of the class railroads had at the end of the passenger train era.

The railroad was pretty busy and it took some time after the meet with No. 8 to get a track warrant to proceed.  In the interim NP train No. 8 had descended the grade to Dayville and had met NP freight train No. 653 which was powered by a pair of Santa Fe F45 locomotives on the head-end and a NP U25C on the rear as a helper.  This train pulled adjacent to the Extra Emigrant Turn at Snowline an posed briefly for some side-by-side shots.  Now with a warrant to Emigrant, the Extra Emigrant Turn departed Snowline as the helper locomotive was being cut off of train No. 653.
The final move of the day after yarding the wood chip hoppers and log flats at Scanlon was to grab the caboose and operate one more time as a caboose-hop from the O&NE Scanlon Yard to the NP Monument Yard where the caboose was set out on the caboose track and the locomotives parked at the engine facility.

As each of the operators completed their tours of duty we congregated in the crew area.  Paul Duncan was the last operator running and shortly he had his southbound Southern Pacific manifest train parked neatly in the South Staging Yard.  This was a very enjoyable operating session.  There were few technical difficulties, the car tab system worked very well, and most importantly, this was a collection of great operators to spend an evening with.

Dean Ferris meticulously created a stage that draws the audience into 1969 PNW railroading.  On this stage today the drama, saga, and action of mountain railroading came to life.  It was an outstanding show!

Paul Duncan, Blair Kooistra, Greg McComas and I carpooled together.  It was good company to be with on the commute back to our rallying point at the Alliance Pilot.

Greg McComas did a write-up of his own experience at this operating session and posted it on his own Michigan Interstate Blog:
Greg McComas' Blog Posting
Item II

An introduction to the NP-GN Oregon Joint Line by Dean Ferris: 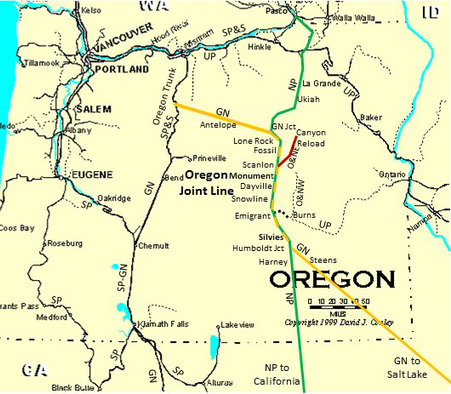 Set in 1969 just prior to the BN merger, the Oregon Joint Line is NP’s answer to the GN-WP Oregon Trunk/Inside Gateway line connecting the PNW and California.  The line extends south from NP’s humpyard at Pasco through Eastern Oregon to connections with the WP-SP paired trackage lines through Nevada.  GN also has a line cutting diagonally across eastern Oregon to gain access to the Salt Lake area.  GN has trackage rights over the NP from GN Jct to Humboldt Jct over a stretch of track referred to as the Oregon Joint Line.   The Oregon Joint line hosts plenty of run through pool power from WP, SP, ATSF, & DRGW.  The GN routing from Salt Lake also sees DRGW Coal trains.  Passenger service is an NP Seattle-Los Angeles train, a GN Portland-Salt Lake Train, and the Oregon Joint Line Mixed from Monument to Wishram.

Major terminal on the Oregon Joint Line is NP’s Monument Yard.  Adjacent to the south is GN’s Dayville Yard, and to the north is Oregon & Northeastern’s Scanlon Yard.  A primary feature of the Oregon Joint Line is the interaction between these yards.  Another key feature is the helper operation south of Monument to Snowline on the 2.2% grade.  The heaviest northbounds will also receive helpers from Silvies to  Snowline.  The Oregon & Northeastern is a timber industry shortline modeled after the Oregon Calfornia & Eastern and Oregon & Northwestern.  The O&NE serves the paper and sawmill complex at Scanlon and also  operates log trains from Canyon Reload.  Basically the layout is a homage to my favorite railroad things – Santa Fe Hotshots, SP Boxcar/Lumber trains, Rio Grande Coal trains,  Western regionals (WP, SP&S), Logging Railroads, and of course my home roads NP & GN.
Adjusted Variabes
Item III

The Columbia and Western is a well-known N-Scale railroad that uses a car-tab system.  This YouTube video posted by the C&W's Mark Dance helps to explain how his system works.  Car tag systems are more common in N-scale than HO-scale because N-scale car numbers are much smaller and more difficult for operators to read.
(function(i,s,o,g,r,a,m){i['GoogleAnalyticsObject']=r;i[r]=i[r]||function(){ (i[r].q=i[r].q||[]).push(arguments)},i[r].l=1*new Date();a=s.createElement(o), m=s.getElementsByTagName(o)[0];a.async=1;a.src=g;m.parentNode.insertBefore(a,m) })(window,document,'script','//www.google-analytics.com/analytics.js','ga'); ga('create', 'UA-60186303-1', 'auto'); ga('send', 'pageview');