A World Apart,
A World Within

A World Apart, A World Within

By Danny Johnson​
The Mississippi River Delta region has been the subject of books and portrayed in movies, but rarely have stories accurately captured the region, its people and reputation as an agricultural empire.

To some, the Delta is flat, barren and less than inspiring visually.  To others, it's a wonder of nature, fertile and diverse.  There is no question that the Delta has abundant agricultural and natural wealth, but it also has a heritage that can't be duplicated.

The Delta is different than the agricultural areas of the Midwest and the open spaces of the Great Plains, but just how it is different is difficult to describe.

It is a place where people still speak to you first and passing motorists will wave just to be neighborly and say a quick "Hello", whether they know you or not.

Insanely hot and humid in summer, a person might be expected to burst into flame after exiting the comfort of air conditioning to wander around in fields or bottomland hardwood swamps.  Winters freeze your soul as cold, biting winds convince you that there is nothing between you and the North Pole but a few strands of barbed wire.

Table top flat with few trees to block the view, the sky seems to go on forever in every direction.  During spring and summer, massive thunderstorms inspire awe and spawn destruction at the same time.  Fall harvest season delivers stunning sunsets as dusty, smoke laden air reduces the sun to a dark orange orb that seems to forever hang just above the horizon, bathing the area in warm, soft light. 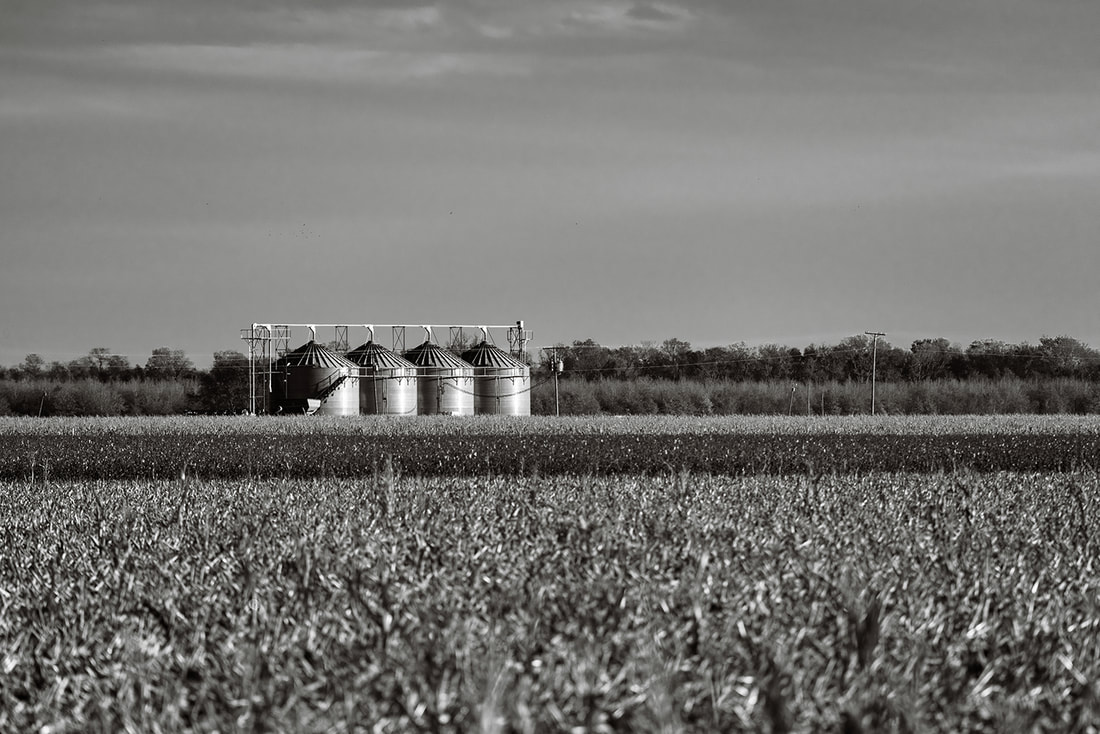 The Delta has a special beauty that is admired by many and shunned by some.  In my case, it has been an acquired taste that has been pleasing visually and spiritually.

Until late 1982, my association with the Delta was solely through infrequent family trips west of the Mississippi River on our way to exotic destinations like Hot Springs, Dallas and Oklahoma City.  After a nail-biting trip across the dangerously narrow lanes of the old US Route 80 bridge at Vicksburg, Mississippi, the landscape changed dramatically.

Gone were the familiar pine-covered ridges and hollows.  In their place was a flat, uninspiring land with corn, cotton and soybeans for as far as the eye could see.  There were trees, but they mainly served as wind breaks or demarcation lines where crops changed.  During those trips, I was convinced that our destination lay just beyond the trees in the distance, only to be disappointed by even more fields and another tree line to contend with. ​ 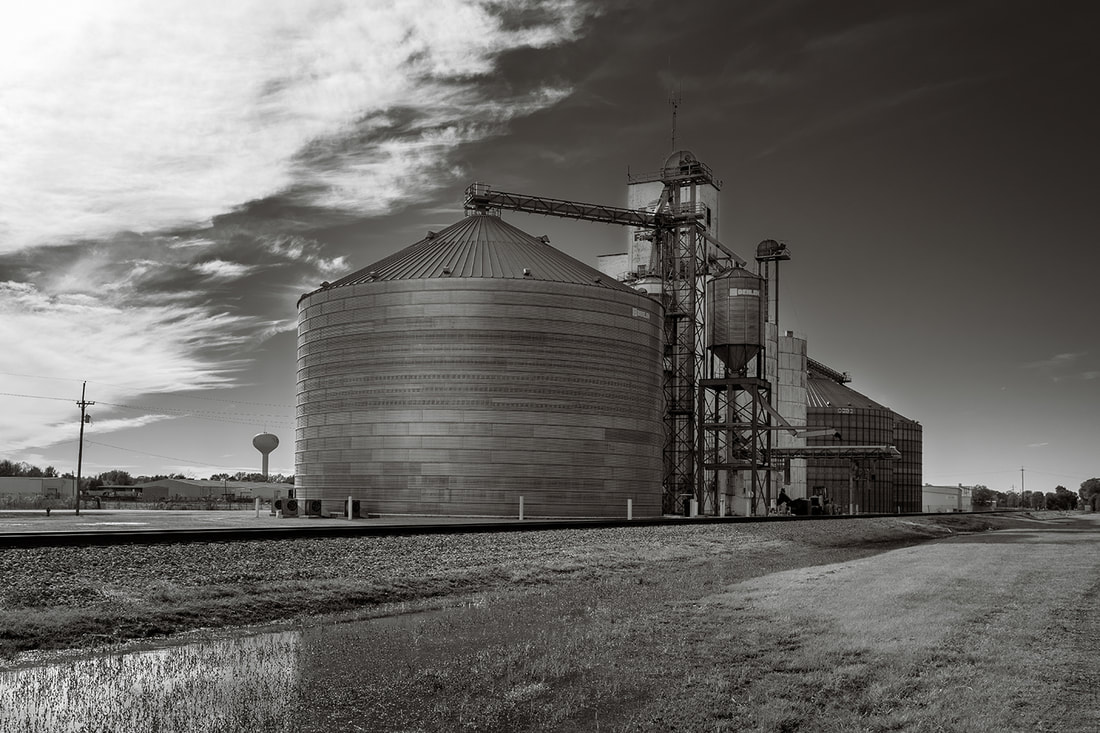 Delhi, Louisiana
As we traveled between Vicksburg, Mississippi and Monroe, Louisiana small towns dotted our route along US 80, breaking up 70 miles of monotony.  Every town, large or small, had four common features - churches, a cotton gin, a grain elevator and classic architecture of a bygone era.  These towns were built on an agricultural economy by hearty people that settled the region and called it home, their descendents following in their footsteps.  All the towns looked similar, but each one had a unique character. 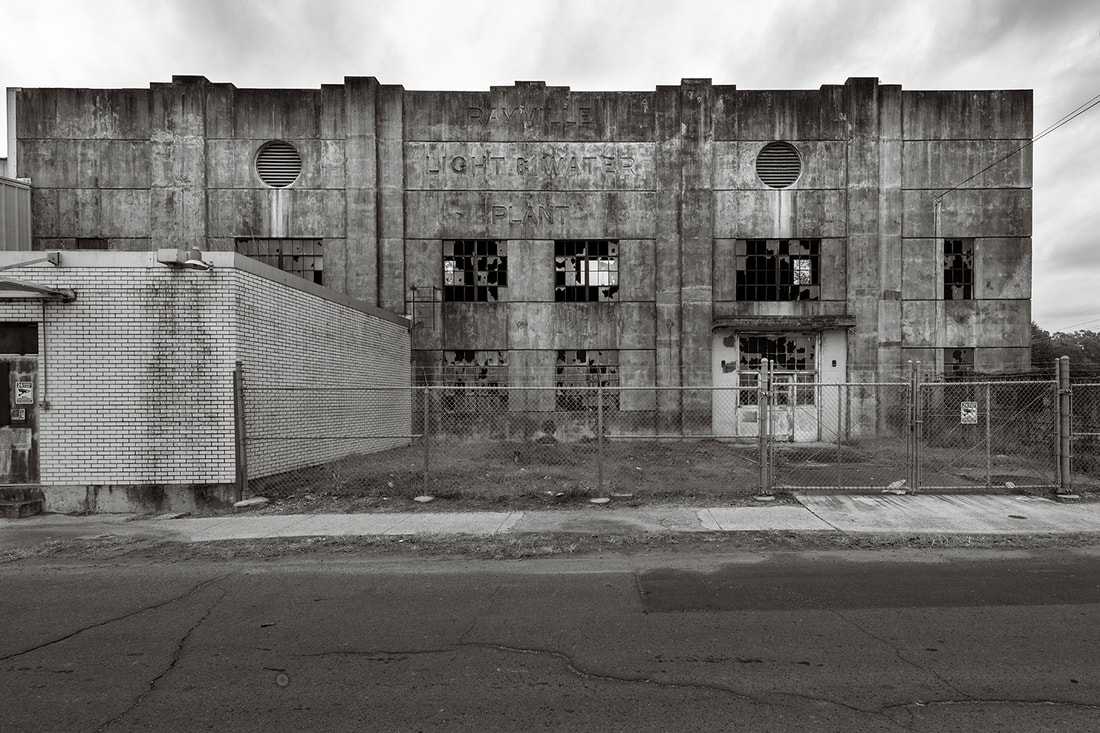 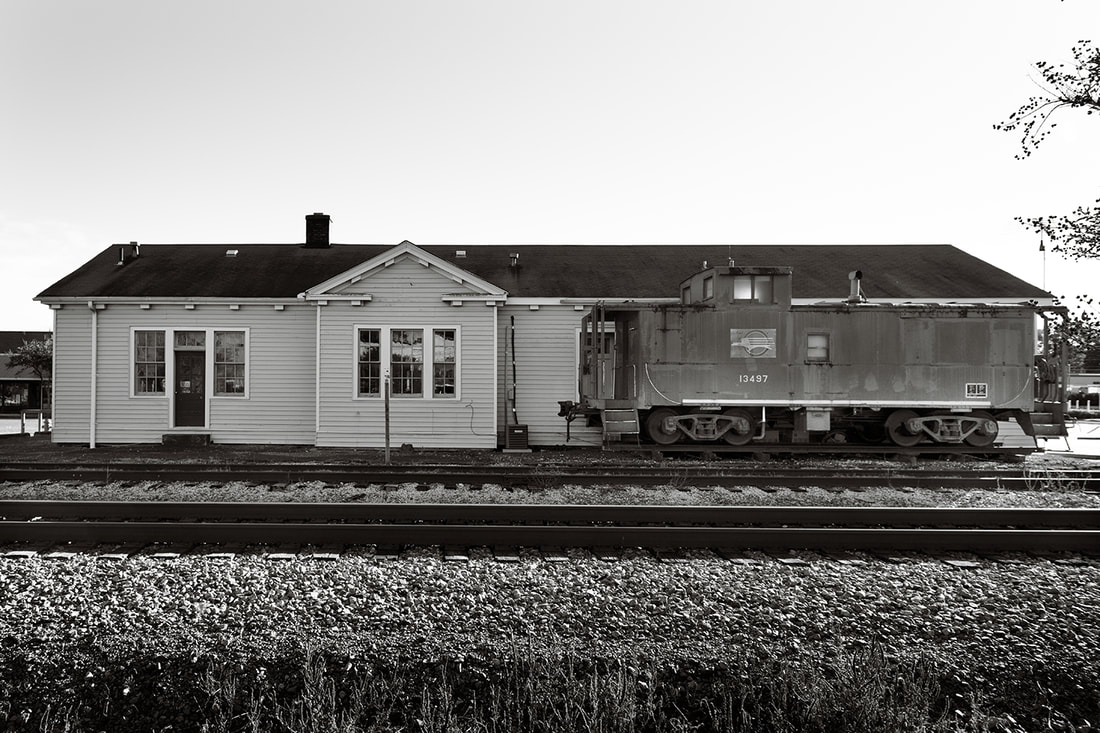 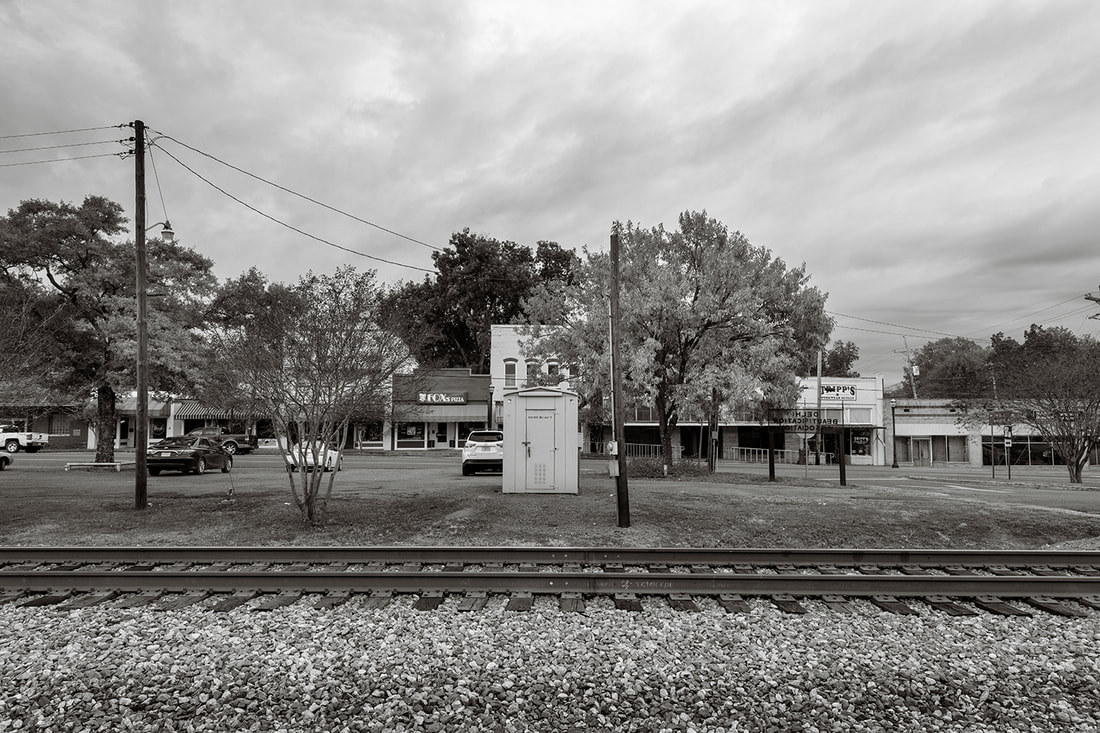 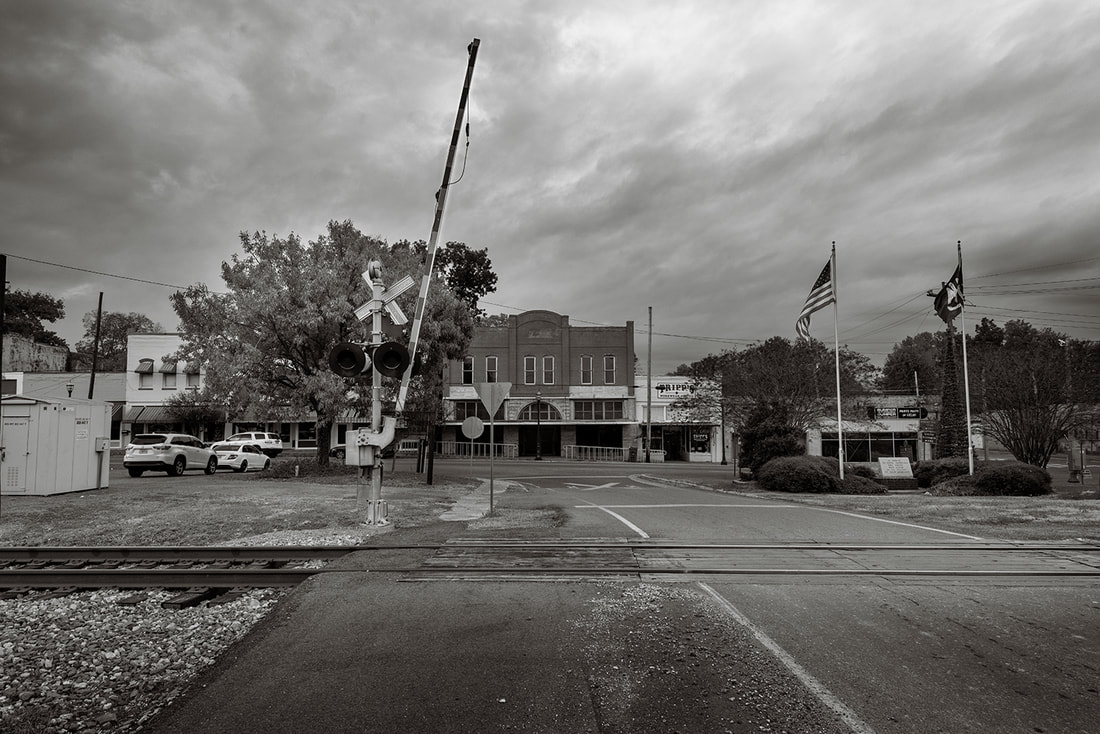 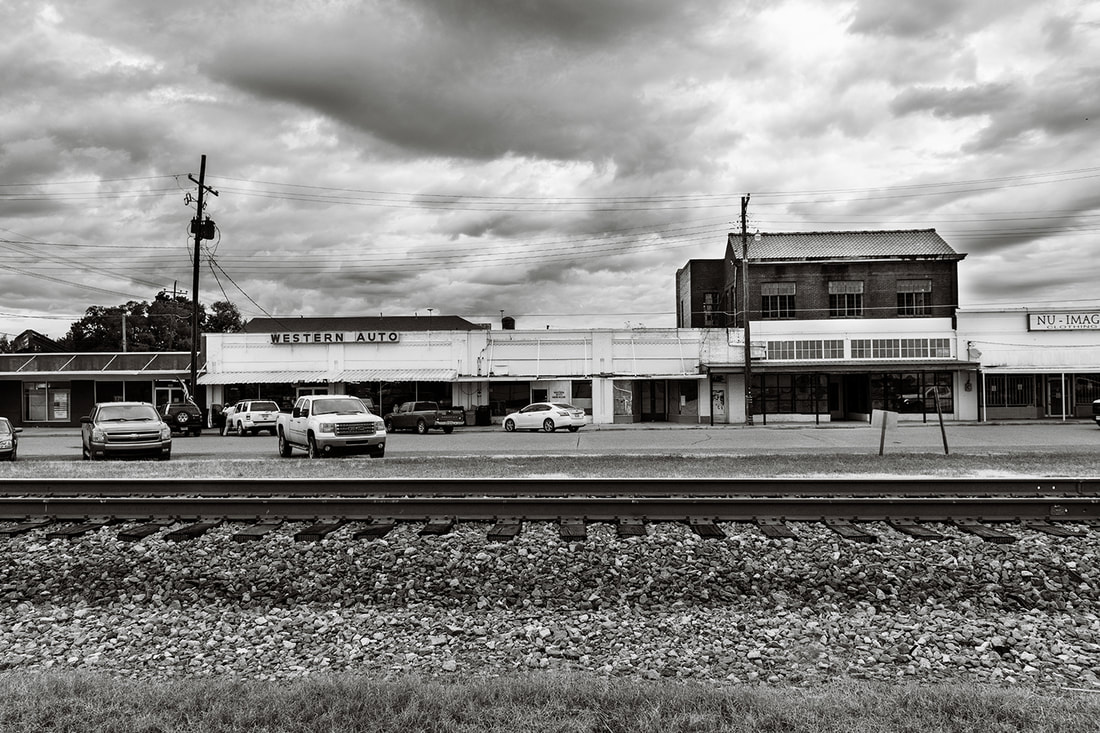 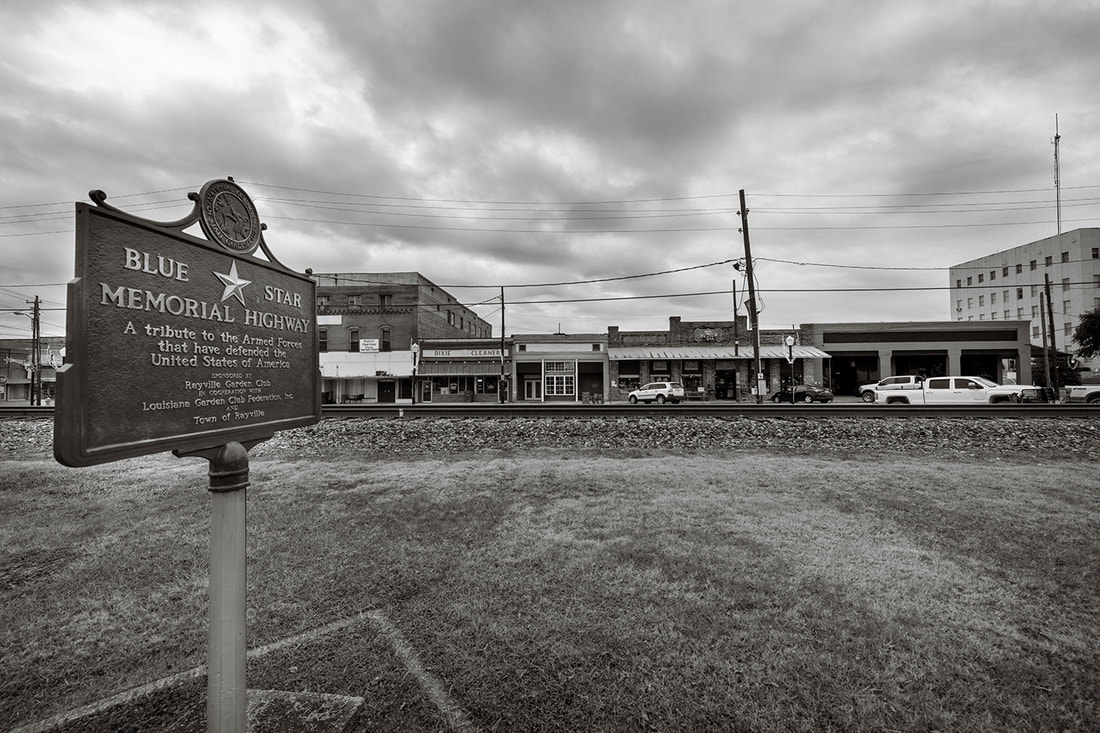 Rayville, Louisiana
​At Monroe we would exit US 80 in favor of parallel Interstate 20, leaving the small towns, two lane roadway and the flat delta region behind us.  Even though the Vicksburg to Monroe portion of the trip was less than inspiring, it had one redeeming feature for nearly the entire distance - a railroad parallel to the highway in the form of the Illinois Central's secondary mainline between Shreveport, Louisiana and Meridian, Mississippi. 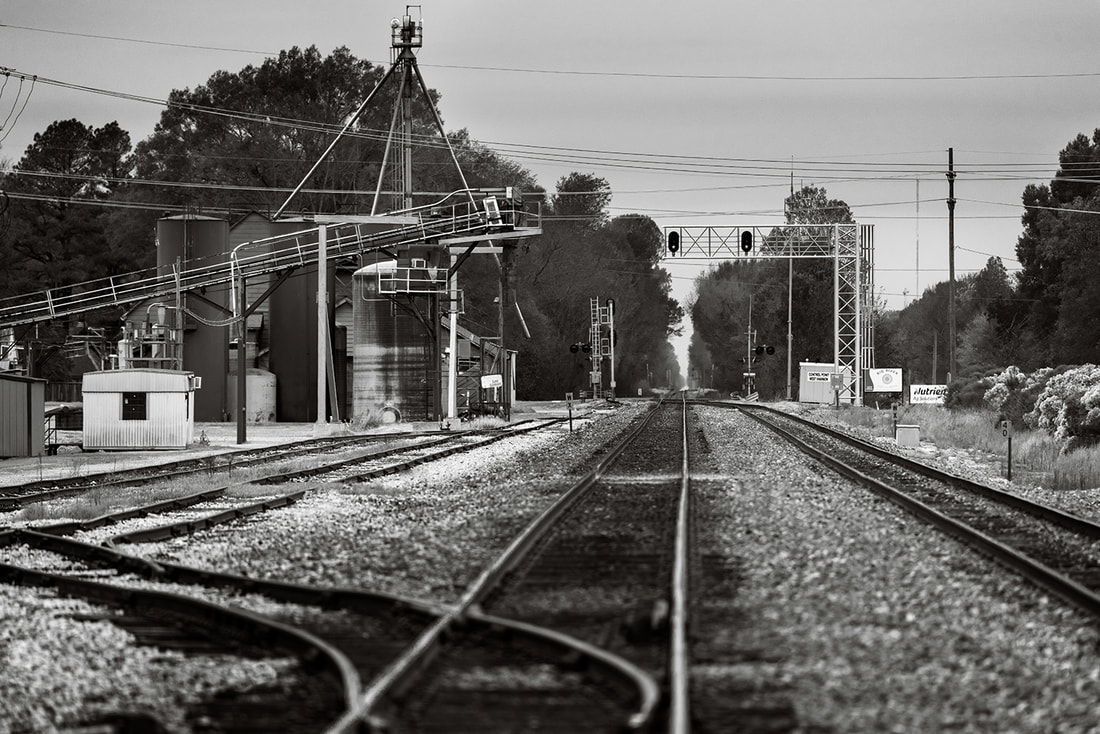 Shannon, Louisiana
Chartered in 1853 as the Vicksburg, Shreveport and Texas Railroad, builders wanted a land link to a more reliable waterway, namely the Mississippi River, so they could avoid the uncertain levels of the Red River in Shreveport.  Building westward from the Mississippi River's west bank across from Vicksburg, the VS&T reached Monroe, Louisiana by 1861.  Shortly afterward, The War Between the States would interrupt progress as the Union forces destroyed the railroad in its entirety and sent confiscated iron rail eastward to be used for Union railroads.

After the War Between the States, the VS&T changed ownership several times.  After being purchased by Baron Emile D'Erlanger, the VS&T was incorporated as the Vicksburg, Shreveport and Pacific Railroad as part of the famous Queen and Crescent Route.  In 1926 the Illinois Central, through its subsidiary Yazoo and Mississippi Valley Railroad, leased the VS&P for 365 years and eventually merged the route into the Illinois Central System in 1959.

The Shreveport to Meridian mainline was an anomaly in the Illinois Central's north-south personality.  This feature gave the line between Vicksburg and Monroe even more character, since the Missouri Pacific crossed or interchanged with the Illinois Central in Tallulah, Delhi, Rayville and Monroe.  The at grade diamonds were always surrounded by interlocking signals, and distant fixed semaphores to protect trains from opposing movements.  These basic and simple elements provided even more interest on a line void of other wayside signals.

After moving to Vicksburg in late 1982, I was a bit disappointed by the lack of local railroad activity along the former VS&P.  I had certainly been spoiled by growing up along the Illinois Central's double track Chicago to New Orleans mainline near Wesson, Mississippi.  While the IC mainline had nice undulating grades and superelevated curves to add drama to railroad photos, the secondary east-west mainline through Vicksburg had no signals, lighter rail and significantly less traffic than I was used to. 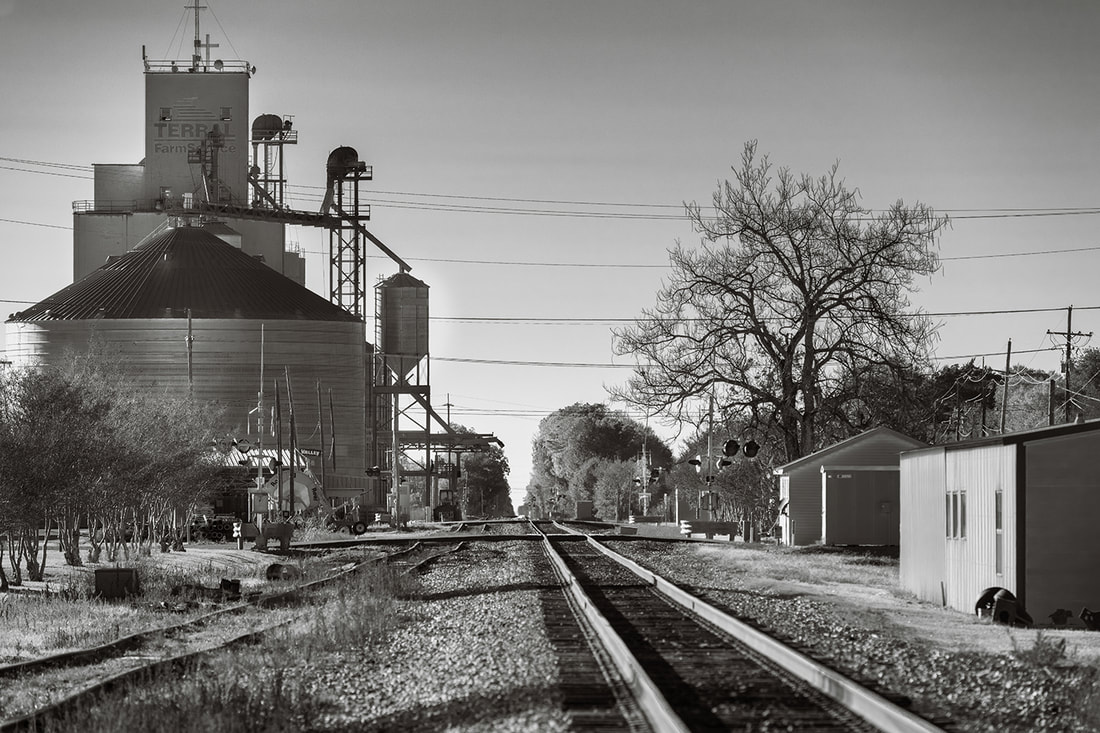 Delhi, Louisiana
At first, the Vicksburg to Monroe segment had little to interest me.  The massive Mississippi River bridge at Vicksburg provided the main visual attraction, but the remainder of the line was, quite simply, boring.  Almost completely flat from the small hamlet of Delta, Louisiana at the west end of the Mississippi River bridge to the Ouchita River in Monroe, I couldn't find any grades to add visual interest to a photograph.  With only 10 very gentle curves over the same stretch, dramatic shots of trains rounding superelevated curves weren't possible either.  ​
Over a period of months, I began to grow fond of the old VS&P as I explored the area and let it introduce itself to me.  I realized that the lack of dramatic curves, grades and the hometown character of the line offered photographic opportunities that I was not exploiting.  I began to photograph the line, but unfortunately, I started too late.  The former Missouri Pacific had already abandoned their intersecting branchlines in Delhi and Rayville.  The MP branch line in Tallulah was intact, but on life support.  The MP mainline in Monroe was bustling with chemical and grain traffic, offering a considerable amount of interchange traffic with the ICG, but I missed the opportunities for shooting the branchline interchange tracks and movements.  By the middle 1990s, the at-grade diamond in Tallulah was removed due to abandonment of the former MP south of Tallulah.  North of Tallulah, the former MP remained on life support.  Steel was still on the ground, but in most locations,  it was under the ground. 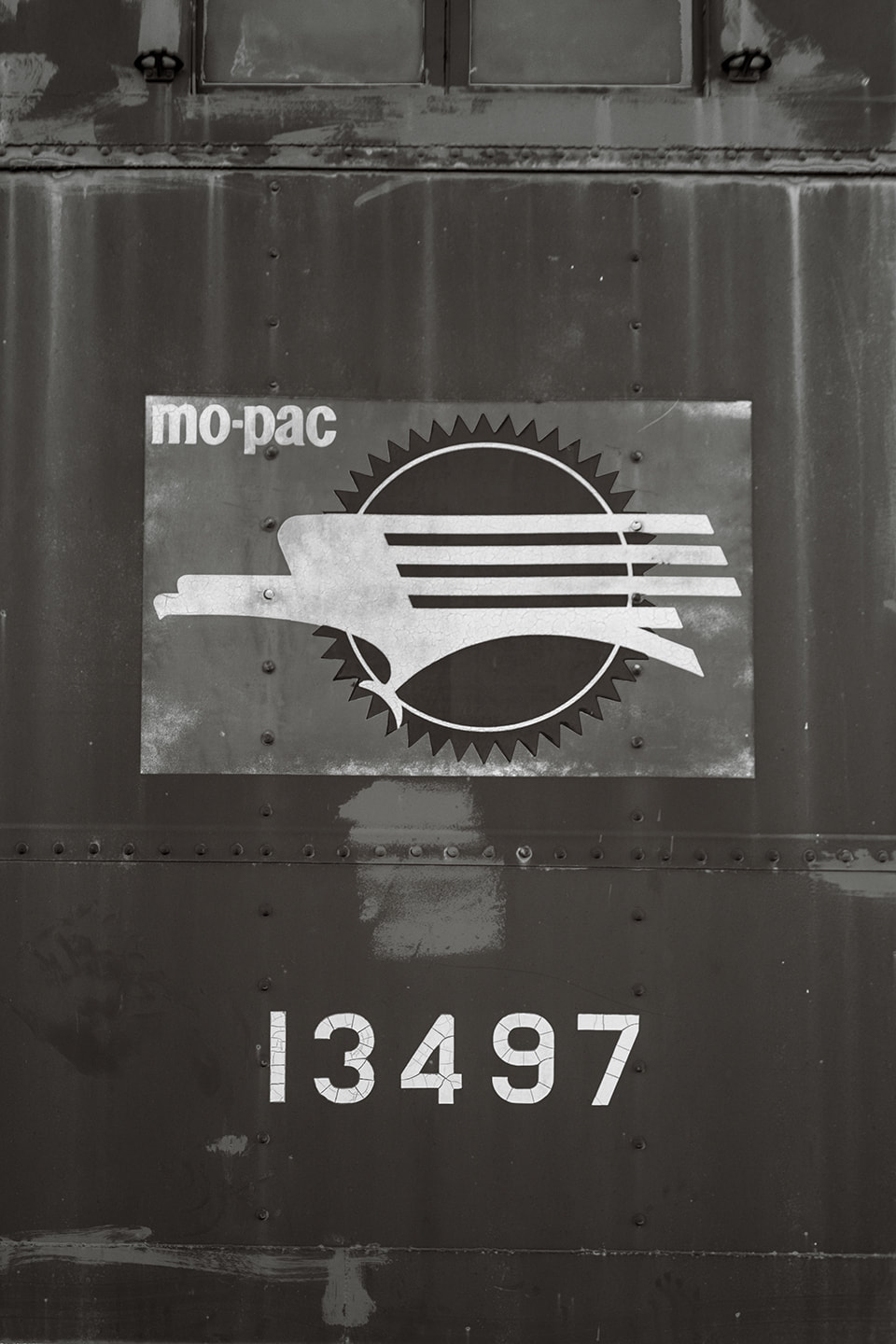 Although perfectly situated for transcontinental bridge traffic, the IC and ICG did little to promote the Meridian to Shreveport route as a transcontinental link, using it only to feed traffic to the Chicago to New Orleans mainline in Jackson.  MidSouth Rail Corporation purchased the entire line as part of the ICG Garage Sale in late 1985, but little else changed as MidSouth fell in step and continued to feed the ICG mainline.  From the onset of MidSouth Rail acquisition traffic was stagnant, or lower than ICG days.

Over a seven-year period, MidSouth Rail began to show promise.  Revenues began to increase due to heavier traffic, but there were still limited funds for significant infrastructure improvements.  MidSouth's performance eventually caught the eye of another north-south Class 1 Railroad, Kansas City Southern.  Armed with sufficient cash, KCS purchased MidSouth Rail in late 1992.  By 1994 KCS had improved the railroad significantly through badly needed rehabilitation.  KCS began to promote the Shreveport to Meridian Gateway as a short, fast route between the west coast and the southeast.  From the start, Norfolk Southern supported the KCS acquisition and began to funnel traffic to the line.  Traffic density increased quickly as new business and improved traffic gateways appeared.  Intermodal trains began running between Meridian and Dallas, Texas in the mid-1990s.  Traffic steadily increased through the late 1990s and early 2000s as transcontinental intermodal trains began using the route.  In 2006 Norfolk Southern purchased a 30% share of the Meridian to Shreveport KCS mainline and giving birth to "The Meridian Speedway", a status it still holds.

Today, traffic density is relatively low by most mainline standards, with an average of 12 trains daily between Meridian and Shreveport.  Of the twelve daily trains, six are Norfolk Southern run-through intermodal trains, and two are Norfolk Southern run-through general merchandise freight trains.  The railroad's physical condition has improved significantly, with heavier rail and CTC.  Gone are GP7s, GP9s, CF-7s and Paducah Rebuilds, replaced by ES44AC and SD70ACe units in the sharp looking KCS "Belle" Scheme.  Trains no longer limp along at 30 MPH, but sail almost effortlessly over the flat profile between Vicksburg and Monroe at 60 MPH.  ​ 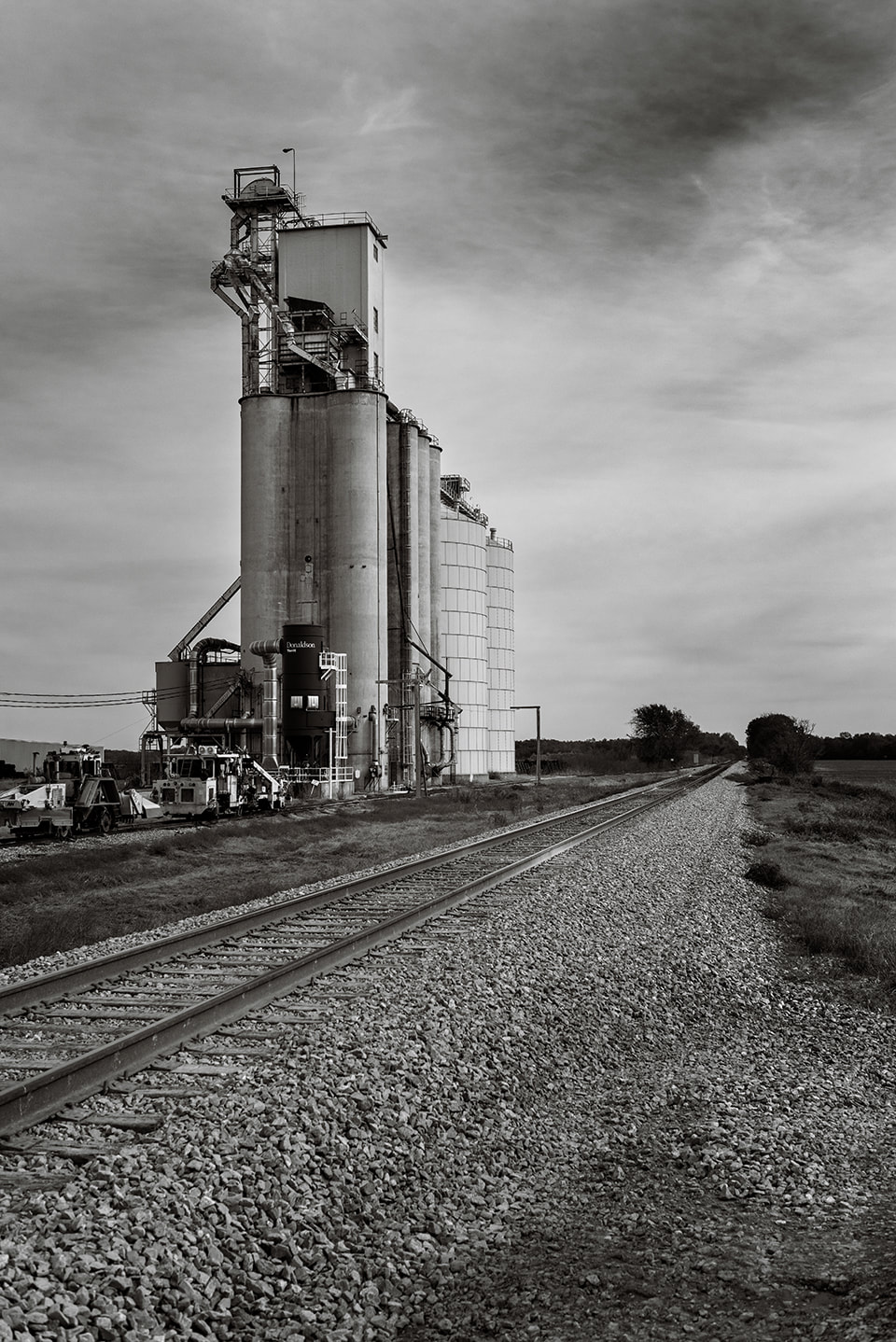 Richmond, Louisiana
Even with the changes along the railroad since my introduction to the Delta in the 1960s, little else has changed between Vicksburg and Monroe.  The view along US 80 is essentially the same as it was over 50 years ago.  The small towns have less traffic thanks to parallel Interstate 20, causing many businesses to close.  Churches and grain elevators remain in every town, but cotton gins have become less common as corn and soybeans have replaced cotton as the main cash crop for farmers.  With the change in crop preferences, numerous small outposts of metal grain storage bins are scattered throughout huge corn and soybean fields, providing temporary storage during harvest season. Classic architecture still rules, although some buildings have been modernized to reflect changing times.  Sadly, many have met their fate as time, the elements and neglect have razed them.

Although Interstate 20 allows me to drive faster and avoid the small town stops and starts, I still prefer to drive old US Route 80 between Vicksburg and Monroe.  I convince myself that it is mainly to watch the adjacent KCS mainline.  However, I do have an ulterior motive.  Traveling old 80 offers a rare opportunity to glimpse the past in a land where things are slow to change.  I enjoy the leisurely pace because it allows me to step back in time as I pass through small towns like Tallulah, Delhi, Rayville and Start.  And if those reasons weren't enough, there are always the experiences that aren't about the trip, but rather about being trackside. 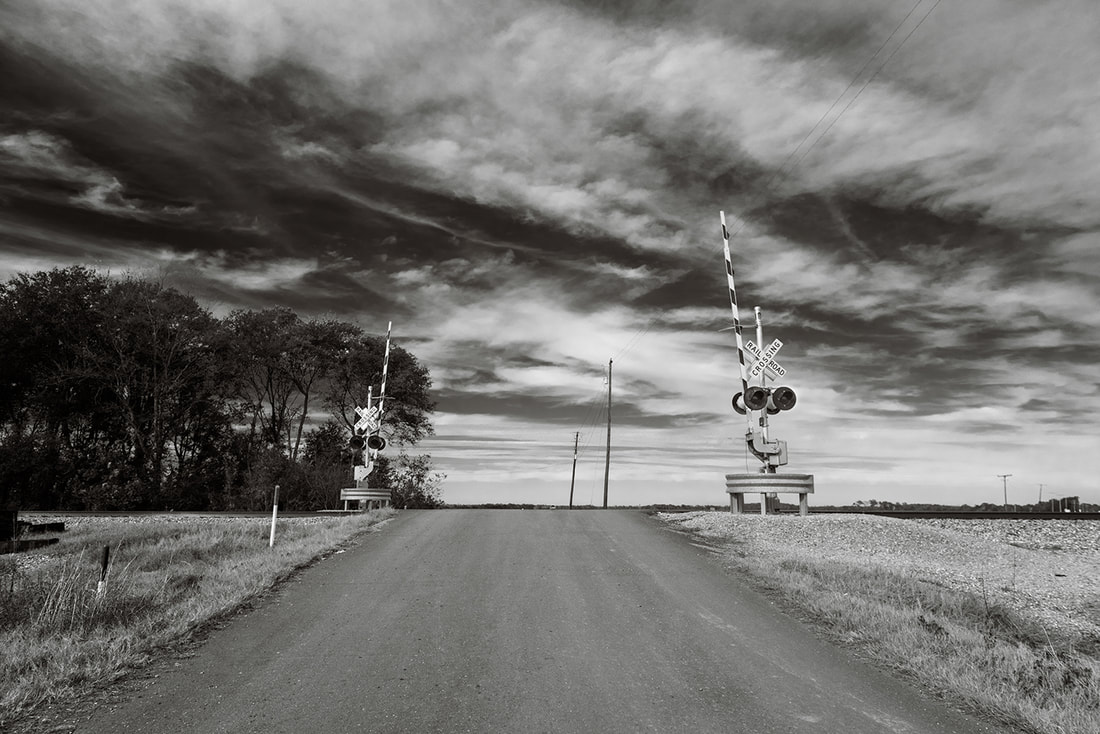 Quebec, Louisiana
There's nothing like sitting at a remote farm road grade crossing on a cool November evening and watching the full moon rise through the Earth's shadow at sunset, while a pinprick of light miles away foretells the arrival of a fast, double-stack container train.  It is almost impossible to describe pacing a freight train on a hot, humid late summer evening while Combines hustle to gather crops well into the night, their headlamps burning blazing a path the thick, damp, dusty air.  There are the melancholy feelings when I see ghost towns where little remains except the railroad and a slowly blinking caution light to warn motorists of a once busy mid-town intersection.  I can't convey the experience of sitting on a Mississippi River levee, high atop the fields after sunset on a fall evening and watching railroad, river and interstate traffic pass in the distance while acres of open cotton bolls glow like snow under muted moonlight.

All these experiences renew me visually and spiritually.  The Delta is truly a world apart and a world within. 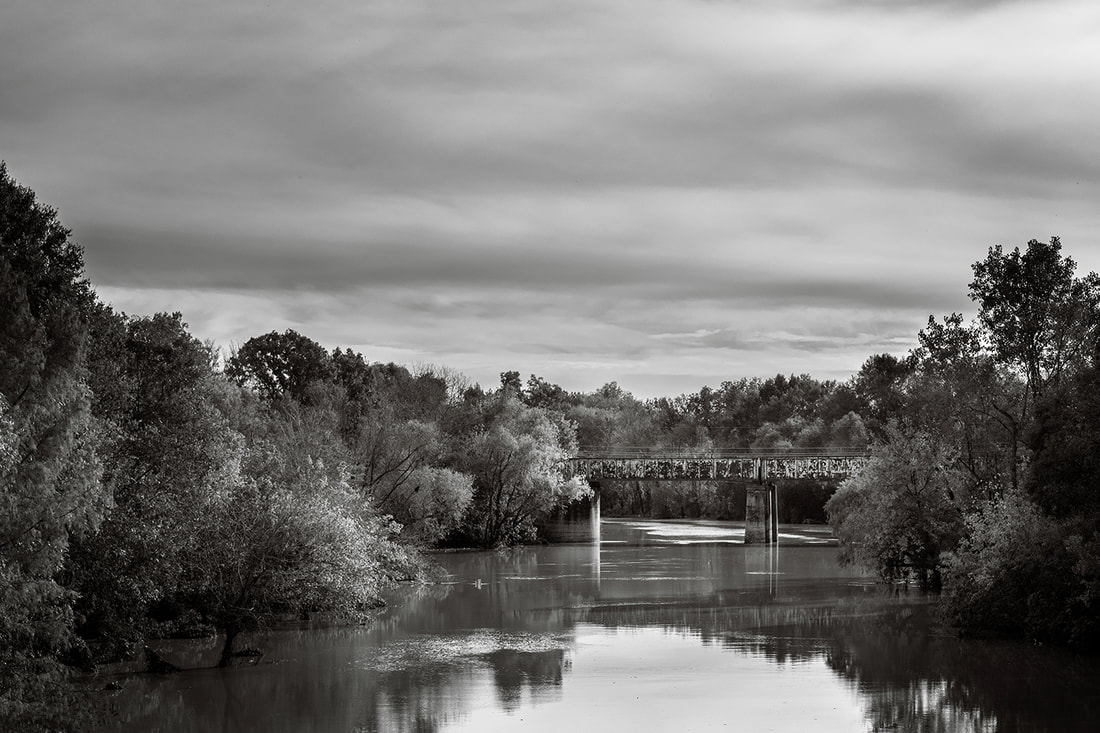 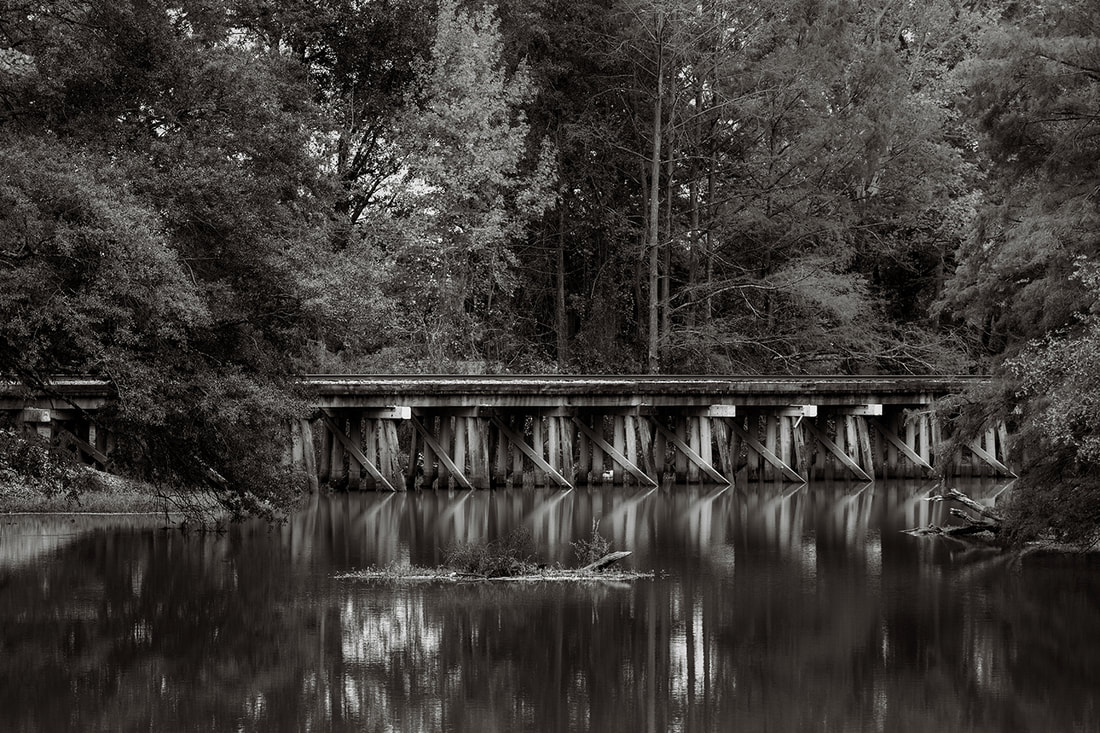 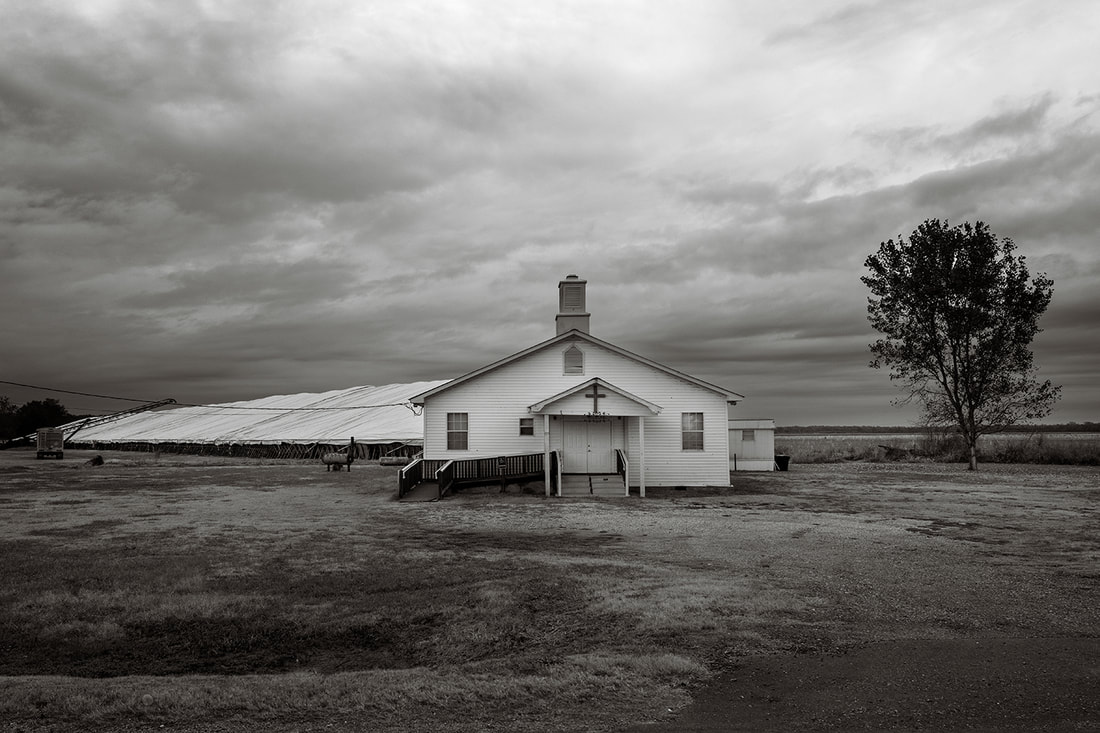