This is one of the very first train videos we took with my grandfather's new VHS camera. It also may be one of the coolest Southern Pacific locomotive consists we videoed!

The first scenes are from on the top level of the Elmwood Medical Center parking garage next to the Huey P. Long bridge. A NOPB motor scurries across the bridge ahead of an eastbound Southern Pacific transfer run, I am guessing for the Illinois Central.

The last scenes appear to be in Old Metairie as the train backs towards IC Mays Yard, though I am not sure why the small train would have traveled this far....
FaceBook Thread
B40-8/GP20 Consist – SP BCNOT – Gentilly – September 7, 1991

The EsPee operated intermodal trains from the Port of Houston’s Barbours Cut container terminal to the CSX Gentilly Yard in New Orleans. These trains operated with symbol BCNOT. I do not believe there was a westbound counterpart train.

On a rainy September 7, 1991 we were standing at the south end of the CSX Gentilly Yard at the closed Almonaster Avenue grade crossing under the Jourdan Road overpass. The bridge was providing us with shelter from a light rain.

CSX MP15T 1211 (one of only 43 built) switches as the SP BCNOT arrives. The locomotive consist on the BCNOT is a very unlikely consist: SSW B40-8 8060 and SP GP20 4107! The GP20’s were nearing the end of their careers with the SP and were generally relegated to transfer service.

As both units were east-facing, the locomotive consist was wyed at the other end of the CSX Gentilly Yard.

It looks like Lee A. Gautreaux was railfanning with us on this day!
FaceBook Thread
SP Memphis Blue Streak – West Texas – Saturday 10 August 1996

Growing up with the SP in Louisiana, I really never developed an appreciation for the railroad until after it was gone. The very eastern end was sort of the stepchild of the EsPee empire.

A month before the September 11, 1996 Union Pacific acquisition of the Southern Pacific, however, Nick Huth, Joe Scorsone, and I boarded Amtrak train No. 1 in New Orleans and traveled to Alpine, TX. There we would rent a car and spend four days railfanning the SP between Sanderson and Marfa. The SP I saw here was not the SP I knew in Louisiana. This was a great railroad!

Looking through the videos taken during this trip I saw that we managed to chase a Southern Pacific legend – the Memphis Blue Streak. Out here the train blended in with the continuous fleet of intermodal hotshots, but the symbol gave it away: 1-MBSMF2-08! The crews were very friendly, printing up a number of lineups so we could be certain of what trains we were observing.

We first encountered this train at the Dyer Road crossing at the west end of Mofeta, TX. Power is a very unassuming scarlet-and-grey trio: SSW GP60 9642, SSW SD45T-2 9298, and SSW GP60 9623. The chase was lengthy, over three hours to Marfa.

After our time was up, we boarded Amtrak train No. 2 for the trip back to New Orleans and I had a new respect for the Southern Pacific.
FaceBook Thread
New Years Day - January 1, 1992 - The SP to NS American President Lines (APL) hand-off!

One of the high priority railroad movements in New Orleans at the time were the APL stack trains handed off between the Southern Pacific and the Norfolk Southern. APL is no more as it has morphed into today's Pacer Stack Train and this traffic now bypasses New Orleans.

On this day we chase the eastbound movement across town.

The first scene shows the train led by a wonderful quintet of SP/SSW B-Boats (7790-7777-7758-7821-7792) pausing at the foot of the New Orleans Public Belt Railroad's Huey P. Long Bridge at Central Avenue. The train had just crossed the Mississippi River.

After this there was a power swap at Terminal Junction. Now powered by only two "carboned-up" NS GP50s (7042-7053), we see the train departing at Oliver Junction as viewed from the Almonaster Avenue overpass. I believe this train ran as NS No. 222 (Michael Palmieri you may correct me from your notes here)!

There is a lagniappe scene at the end. We moved towards Lake Pontchartrain on the NS and caught the night time arrival of Amtrak train No. 19, the Crescent, as it rounds the curve after crossing Seabrook drawbridge. This curve points the train due South towards N.E. Tower and Oliver Junction. Powering this nocturnal visitor to the Big Easy is an F40PH and a GP40!
FaceBook Thread
L&N Junction - New Orleans, LA - April 24, 1993

Amtrak GP40 664 is parked in on of the small yard tracks at L&N Junction where the CSX connects with the NS New Orleans Terminal Mainlines.

A westbound CSX to SP transfer eases by with six B-boats and an EMD lease GP38-2. Amtrak train No. 1, the westbound Sunset Limited, soon enters the scene, slowly overtaking the SP transfer.
​
Today, the Sunset Limited no longer operates here, the SP is gone, and all of the yard tracks have been removed.
FaceBook Thread
SP Dash-9's - July 22, 1996
​
While skimming a video tape taken in 1996, this clip got my attention. I pulled this one for the sound. A pair of SP C44-9Ws and a Tunnel Motor do some switching in Lake Charles, Louisiana. The rhythmic chant of these big GE's is fun to listen to...
FaceBook Thread
SP in "The Trough" - New Iberia, LA - July 23, 1996

An eastbound EsPee intermodal train rolls through "The Trough" in the middle of West Washington Street in New Iberia, LA. A Speed-Lettering Tunnel Motor leads Kodachrome SD45 SP 7559 and a CSXT B40-8. I would imagine the SP 7559 was one of the last Kodachrome painted units...so I can model both schemes in 1996!

Love the sound of the Nathan P-3 announcing the train's passage.
​
The last scene of standing water on the SP Sunset Route explains how this unique section of mainline track got its nickname! 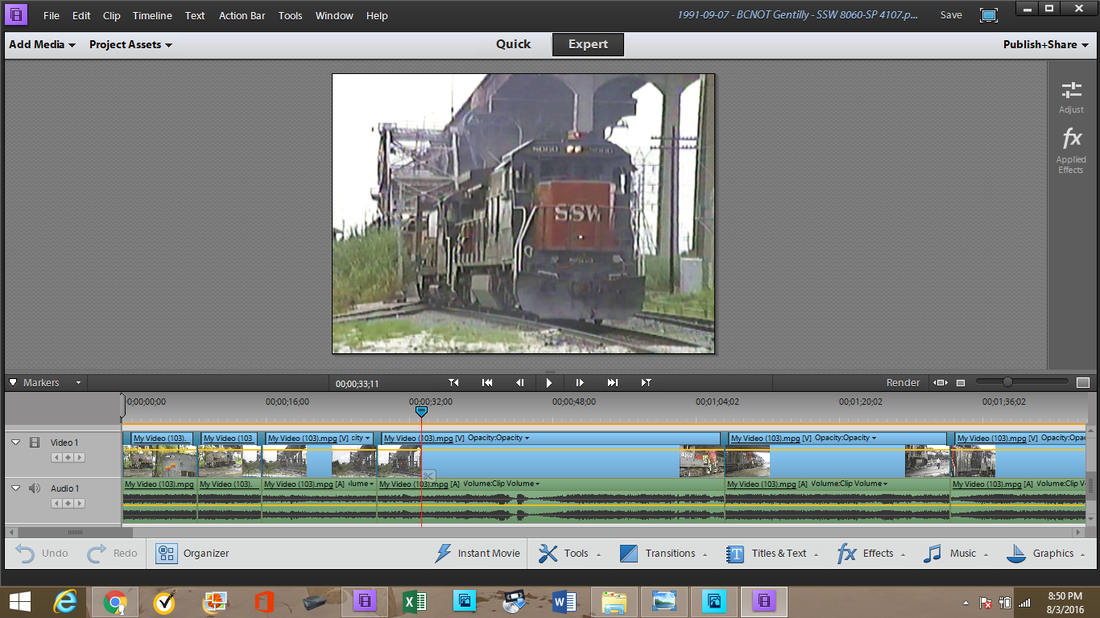