It looks like the bunch of us went to visit the UPRR Avondale yard after leaving Iron Horse Hobbies and Central Avenue after seeing NS No. 393 there.

Of interest at Avondale was an MKT SD40-2, blue MP GP15 1677 switching, and a former SP SD39 in a consist. The highway parallels the yard and gives access to the diesel shop which I believe was destroyed by Hurricane Katrina.

I'd imagine we were hanging around in the hopes that the MKT locomotive would be hosteled to location where it could be better photographed.
FaceBook Thread
UP K-Line Stack Delivery – Old Metairie – August 19, 1989

Here we observe the Union Pacific delivering K-Line stacks to the Norfolk Southern on the NS’s New Orleans Terminal Company mainline in Old Metairie. It would appear that the train lets a crew member off at LaBarre Road to cut the crossing as the whole train must not have fit between LaBarre Road and Shrewsbury Road.

We then pace the power through Old Metairie for a few blocks and then end with a scene of the light power continuing east towards Metairie Road where the power can switch to the other main to return to the Union Pacific’s Avondale Yard across the Mississippi River.

The train was seen just over one year after the Union Pacific absorbed the MKT on August 12, 1988. This transaction is reflected in the power consist on this train. The lead unit, UP GP40 674, was formerly MKT GP40 239. It was renumbered and painted into the Union Pacific color scheme on June 23, 1989, less than two months earlier.

The MKT heritage of the second locomotive, MKT GP39-2 366, is quite evident. This locomotive would get to wear its MKT livery a bit longer. It would not be repainted until September 17, 1990 when it would emerge as UP GP39-2 2365.
​
The last unit, UP SD40-2 3448, is a veteran Union Pacific locomotive that appears to also have recently been repainted.
FaceBook Thread
This clip is from that video in 1993. Evidently the Union Pacific was running an officer car special westward from Avondale with Centennial DDA40X locomotive 6936 leading and I knew about it. The date is February 23, 1993.  Behind the UP 6936 were nine cars: UPP 207, Cabarton, North Platte, Feather River, Portola, Green River, Harriman, Overland, and Idaho.

The first shot is at the Willswood Lane grade crossing. We arrived with enough time to set up the tripod and video the train departing at a leisurely pace. For the second scene we race to the Live Oak Blvd Crossing (before the crossovers to the adjacent SP/BNSF main line were installed) just in time to jump out of the car and photograph this impressive locomotive accelerating rapidly with the UPRR finest varnish! The horn reminds me of the ones used by the KCS!
​
The locomotive had a banner on the side with the Texas & Pacific logo and the words "Texas Eagle" on the side. Not sure what the purpose of the trip was though... 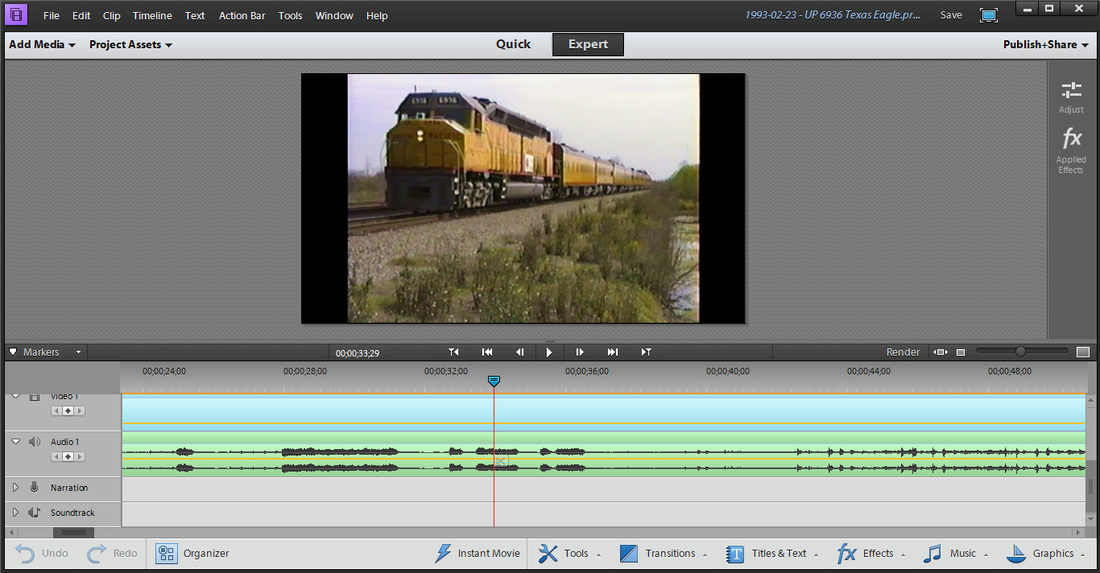