An East-West Railway Through the Mid-South

By J. Parker Lamb
Passage of the Staggers Rail Act in 1980 began the most extensive overhaul of the nation’s railroads in over half a century. In particular it erased many of the restrictions that remained from the period in which railway transport was controlled closely by the Interstate Commerce Commission. Instead, this rigidity was replaced by less restrictive policies of the Surface Transportation Board (STB). This new environment also allowed more aggressive marketing by railroads and also reduced the difficulty of railroad consolidations. Taken as a whole, these sweeping changes provided a major boost in the attractiveness of railway investment. 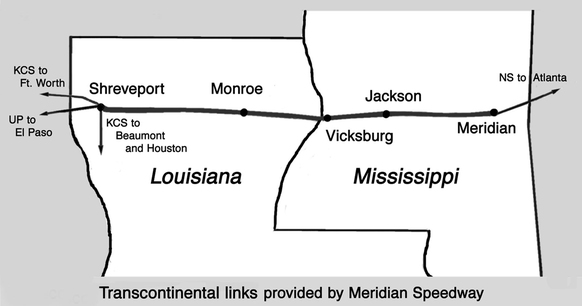 An anticipated effect of less federal control was an acceleration of mergers by the nation’s largest companies, themselves formed from an earlier round of mergers of the 1970s. Within a decade of STB oversight, there began what is usually termed the era of mega-mergers, which was not completed until the last years of the Twentieth Century.

Absent from the new mega-systems were mid-sized roads such as the 1500-mile long Kansas City Southern, which had acquired in 1993 the 300-mile Meridian-Shreveport line from MidSouth Rail Corporation. During this period, KCS was a component of a diversified holding company known as KCS Industries. In the early 1990s, this structure was under assault from factions within the board of directors, some of whom wanted to shed the railroad and concentrate on its remaining business sectors, while the other group of directors saw KCS’ future as a rail-only operation. During the mega-merger period, KCS directors had wooed a number of possible suitors, but found no interest.
Another major development during this period came about through changes in global traffic patterns, which were now focused on minimizing transit time between producing countries of the Far East, and consumers in the USA and Europe. This east-west traffic pattern had resulted in a daily fleet of hundreds of inter-modal trains that moved millions of containers and trailers annually between the Atlantic and Pacific oceans much faster than was possible with all-water global routes. However, by the early 1990s, total transit time between America’s two coasts began to increase after the only two trans-Mississippi River gateways along the nation’s southern tier, New Orleans and Memphis, reached their operating capacities, as had St. Louis some years earlier.
A major need for this non-signaled mainline was an improved train control system that would handle the increased level of traffic and thus produce an increase the “train velocity” (average speed between terminals). Unable to afford an end-to-end installation of CTC, the road instituted the contemporary Track Warrant System in which the dispatcher gave verbal orders to the train crew regarding their sole occupancy of a specific section of line, thus assuring that there was no interfering traffic. To further improve the efficiency of this operation in 2003, KCS devised a semi-automated, switch-control system for the most active and remote sidings. It used a power-throw on one end and a spring-switch on the other, guarded by target signals. The engineer of an approaching train could activate the power throw by cab controls.

Other major bottleneck projects included the 2002 simplification of the KCS-Canadian National grade crossing in downtown Jackson, and the 2004 replacement of an 18-degree mainline curve (with one of only 7 degrees) in downtown Vicksburg that dated from the A&V years. Some idea of the new route’s explosive growth is seen in a comparison of annual tonnage through Greenville, Tex., gateway to the Dallas-Ft Worth area. Between 1997 and 2002, there was an increase of 3.9 megatons in each direction, which represents a doubling during the five-year period.

An Eastbound Intermodal train climbs toward downtown Vicksburg, MS in September 2005 (J. Parker Lamb)
To decrease delays from yard congestion, KCS began a modernization program for facilities in Meridian, Jackson, Vicksburg, and Monroe. A major part of the route restructuring was the abandonment of Vicksburg as the operational hub, and replacing it in 1996 with the entirely new High Oak yard in the Jackson suburb of Richland. High Oak began with 10 tracks but later expansions have added more classification and storage tracks as well as an inter-modal facility, essentially doubling its size.

A few years later KCS was able to install two “islands” of Centralized Traffic Control, plus new sidings, around Monroe and between Vicksburg and Jackson to further reduce delays in these two congested areas. The overall effect of these enhancements, costing $300 million between 1994 and 2006, was displayed by the line’s capacity to handle skyrocketing increases in weekly train volume from 164 (1995) to 206 (1998) to 296 (2004).
After early successes of the Meridian Speedway, there was speculation that the KCS itself might be swallowed up by one of the big four systems, but it became clear that the overall financial climate was not conducive to such a major shakeup, as the mega-systems were still digesting large debt loads incurred in their creation. Thus in October 2005, some 15 months before its haulage agreements with BNSF and NS were to expire, KCS began serious discussion with the large roads about a new financial structure that would share the costs more equally between the user roads. Each of the large roads had a special need, with NS anxious to connect with UP at Shreveport while BNSF wanted a route to its Ft. Worth terminal.

In the end it was NS’s Wick Moorman who was able to strike an agreement with Haverty on a new form of cooperation. The plan, finalized in December, created an entirely new corporate entity. Known as Meridian Speedway LLC, it was owned jointly by the two roads (70 percent KCS), and gave NS exclusive rights to operate transcontinental, inter-modal trains, thereby permitting Atlanta-Los Angeles service to use UP’s recently rehabilitated Ft. Worth-El Paso trackage (original Texas & Pacific).
Stacked on top of these high-speed runs are seven westbound manifest runs. Two of these connect Artesia to Jackson and to Shreveport, four others connect Jackson to Dallas, to Laredo, TX, and to Port Arthur, TX. The remaining one is a daily Meridian to Jackson run. Eastbound manifests include Shreveport to Artesia, to Jackson, and to Meridian, along with a Jackson to Artesia run. This high level of traffic certainly displays the wisdom of Haverty’s early vision of the Shreveport-Meridian route.

Long-time observers, such as the author, cannot but smile as they compare today’s operations to the glory years of the Queen & Crescent system a century early. 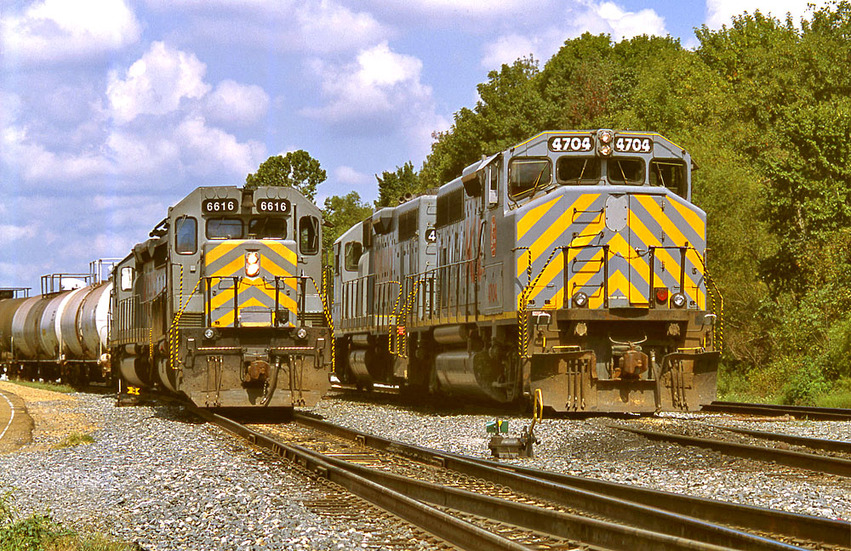 1. For those who desire more detailed historical information relating to predecessor lines of the
Meridian Speedway, the author’s book Railroads of Meridian (Indiana Univ. Press, 2012) is
suggested.  To order from Indiana University Press click the button below:
Railroads of Meridian
2. The author expresses deep appreciation to Danny Johnson of Vicksburg for providing the KCS
data on current traffic.