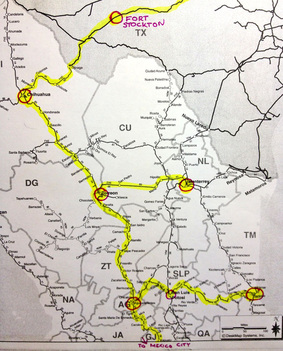 Part of the business plan presented to Georgia Pacific senior leadership was an aggressive agenda to capture a large portion of freight traffic traveling between Eastern and Southern U.S. markets and Mexico.  There was a four-point strategy to accomplish this:

1 – Act quickly on the newly created opportunity to privatize railroads in Mexico.  The subsidiary Chihuahua Rio Fuerte y Pacifico was formed and the primary routes highlighted in yellow on the map were secured with a 50-year operating concession from the Government of Mexico.

2 - Upgrade the core routes of the Meridian Speedway to handle traffic at a rate that would allow competition with other routes.

3 - Build a hump yard at Fort Stockton, TX that would serve as the primary point of classification for manifest traffic in the Mexico network.

4 - Work outside the Meridian Speedway network to develop primary long-distance routes.  This would include direct service from Fort Stockton to terminals on other US Class I railroads as well as coordination with Mexican counterparts to provide competitive service to the interior of Mexico.

The primary NT&O connection with Mexico is at Ojinaga, Chihuahua which is adjacent to Presidio, TX.  West from Ojinaga the railroad runs west through Chihuahua to Topolobampo, Sinaloa on the Gulf of California--the shortest route to Pacific Waters from the U.S. East coast.  Most of the traffic is diverted south at Chihuahua, Chihuahua to other Mexican destinations.  The route to Topolobampo never achieved the significance that Rail Baron Arthur Stilwell dreamed of because of the tight curves and steep grades southwest of Creel, Chihuahua that greatly restrict train length and speed.

A manifest plan was designed for the hump yard at Fort Stockton, TX to classify cars for nine trains a day into Mexico, or three builds/departures per shift.  The Mexico blocks sorted at Fort Stockton are Saltillo, Chihuahua, Torreon, Monterrey, Tampico, Aquascalientes, Mexico City Empties, Mexico City Loads, and Mexico City South (to Ferrosur).  Trains could be comboed, annulled, or extras called on a daily basis.  These decisions would be made at the Superintendent level.  For example, the Torreon and Saltillo blocks could ride the train to Monterrey or the Aquascalientes and San Luis Potosi blocks could ride the train to Tampico.  The three Mexico City blocks could be consolidated into one train as well.  The marketing department, however, has made a commitment to fill these trains up…and they will.

A locomotive shop would also be located in Fort Stockton to support the fleet of locomotives assigned to this service.  These units, primarily SD70Ms, will have Fort Stockton labeled on them.
Page 4