This subject came to mind as I was considering the 70-ton diesel-electric locomotive model that General Electric designed during World War II for shortline railroads with light rail and light axle weights on bridges and trestles.

Specifically, I was thinking about the fact that GE had virtually no competition for its lightweight 70-ton locomotive.  Although Whitcomb had built a large order of 75-ton diesel-electrics for Canadian National that somewhat resembled GE’s 70-tonner and offered comparable horsepower, weight and performance, a problem with the CN units resulted in the order being returned and replaced with General Electric 70-tonners.  A few Whitcombs were built for domestic use and continued in service for many years.  However, most people who were knowledgeable of GE’s 70-ton model believed that Whitcomb or other builder’s provided near negligible competition to GE’s 70-tonner.  As a student of the history of the GE 70-tonners I agree with others on the lack of competition for the model.
In the early 1930s General Electric started building a range of small diesel-electric locomotives ranging from 25 to 80 tons. Although they were designed for industrial users, a significant number of shortlines also bought and successfully operated some of these models.

By the mid-thirties, GE was sending a representative to the annual meetings of the American Shortline Railroad Association to discuss internal combustion engines.  At one of those meetings, the president of the association and a number of interested members met privately with the GE representative requesting that his company develop a locomotive that would be suitable for short lines as well industrial users.  The next year, the GE representative returned and introduced an improved range of models from 25 to 80 tons, depending on the service they would be used in.
Why would the three major diesel-electric locomotive builders design and build a 99 ton locomotive that was essentially equal with respect to horsepower, weight and performance? This question reminded me of something I read many years ago, possibly 30 or 40 years, about the reasons for the 99 ton locomotives.   However, for a long time I could not recall exactly what the reason was.  I recalled that there was some labor implication in the decision.  I did not think it was the fireman issue because that was settled in the agreement that permitted the use of locomotives weighing less than 45 tons without employing a fireman. In more recent times, as a matter of personal curiosity, it became my passion to learn if my recollection about the 99-ton models was correct.
Labor agreements going back to around the beginning of the 20th century did indeed stipulate that engineers and firemen would be paid on a daily basis based on the weight on drivers of whatever locomotive was being operated.

I am satisfied that this is the revelation that I needed to answer my question as to why there was a 99-ton diesel-electric instead of a 100-ton model.

Bonhomie & Hattiesburg Southern—EMD SW-1s—Rail weights 60/75
The labor issue probably had little effect on most short lines except perhaps those that were subsidiaries of Class 1 railroads. However, the fact that short lines bought the 99-tonners raised the question of the weight of rail on which they operated and were the 99-tonners indeed competitors to the 70-tonners.  My analysis developed that a number of short lines operated 99-ton diesels on rail weights as low as 60 pounds, and in some cases, less.
It occurred to me that in my own experience, we had used EMD SW-1s on the South Georgia Railway and Live Oak Perry & Gulf RR.  In the summer of 1953, before Southern Railway bought these two roads in September 1954, one of the LOP&G 70-tonners broke a crankshaft while in watermelon extra service on the South Georgia Railway.  This put the two roads in a bind.  Since the owner was negotiating to sell the roads to the Southern, it was only natural that they ask the Southern for the lease of a small engine to replace the out of service 70-tonner. Southern sent down its SW-1 No. 2004.
On a more weighty matter, the Valdosta Southern Railroad Company was organized in 1954 to take over Georgia & Florida’s 28-mile Madison Branch between Valdosta, Ga., and Madison, Florida.  Rail weight on the entire line was 60 pounds on the mainline and 45 pounds on sidings.  The new owner immediately replaced the 60 pound rail between Valdsota and Clyattville, Ga., site of a new paper mill, with 90 pound rail. However, the VSO continued using the 60 pound rail on the remaining 18 miles from Clyattville to Madison.  Valdosta Southern’s first diesel-electric was a 115-ton model 900 HP unit which the company sent to EMD for rebuilding as a model SW900 900HP locomotive.  Although the road bought a new GE70T diesel that was placed in service before the SW900 rebuild was completed, the 120-ton locomotive plied the 18 miles of 60 pound rail as needed without incident. 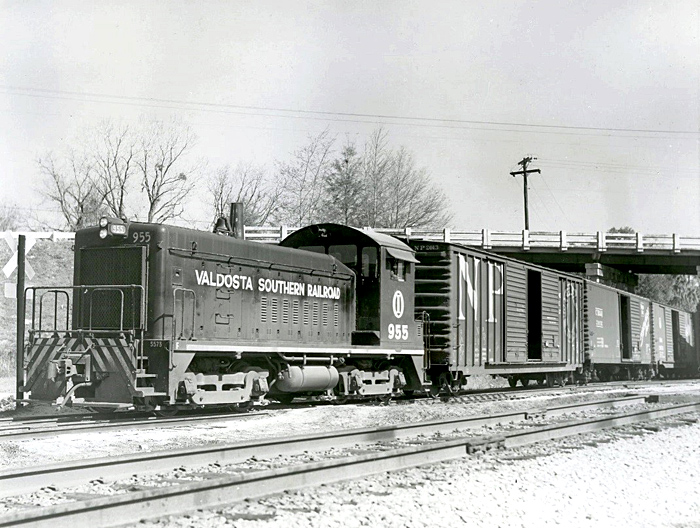 In this circa 1960 view, Valdosta Southern SW900 No. 955 picks up an interchange cut from the Seaboard Air Line at Madison, Florida. The 115 ton diesel ran on 60-pound rail between Clyattville and Madison as needed. Note the O-I logo of parent company, Owens Illinois, Inc. 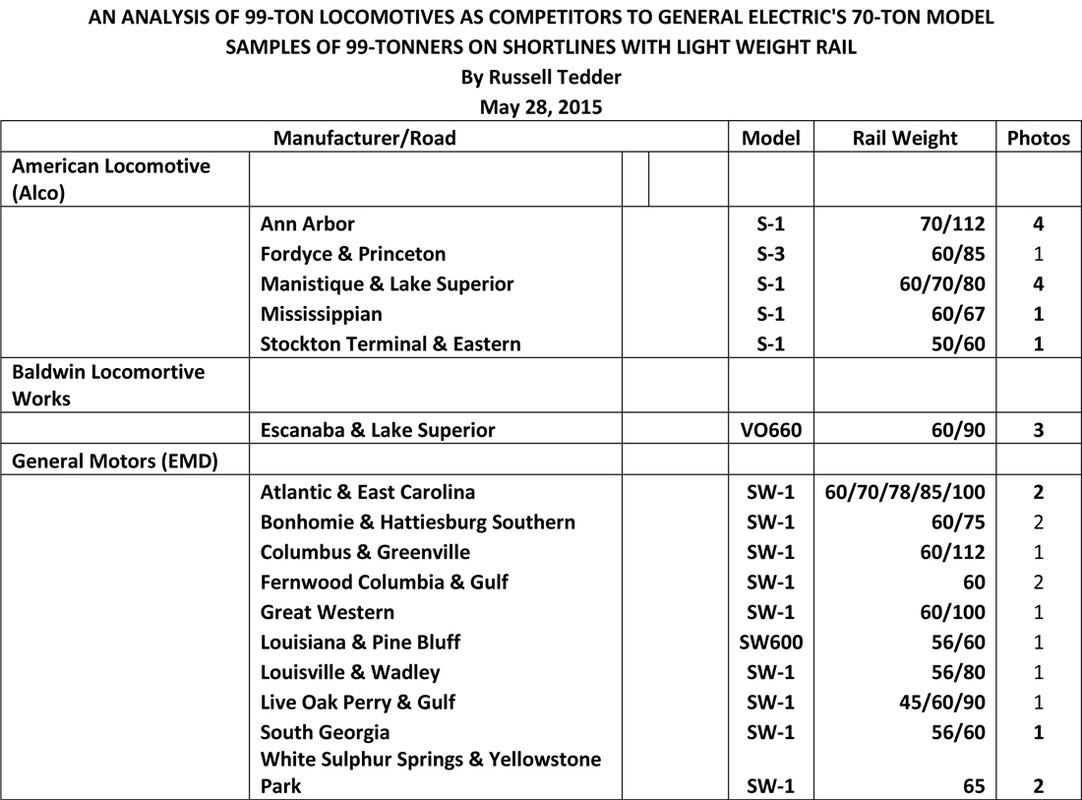 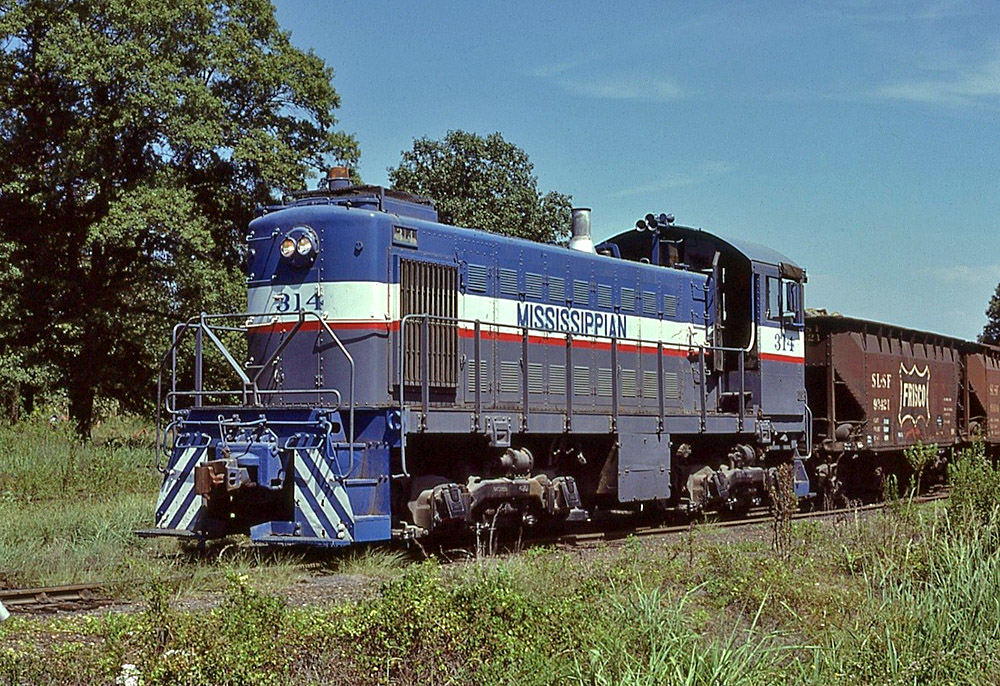