After two years of trying I finally manage to get away for a week during the winter of 2016 to shoot the KCS Meridian Speedway. Stella even manages to get off on short notice and go. The goal is KCS’s retro belles. The plan is to drive down on Saturday, scout out the line on Sunday which is forecasted to be cloudy, then go on down to Gulf Shores on Monday which is also supposed to be cloudy. Then spend Tuesday through Friday shooting the Speedway which are supposed to be sunny and warm. Then drive home on Saturday. We would end up sticking to the plan pretty close. As an added bonus we would end up missing a week of snow and cold weather at home while enjoying mostly sunny weather in the 70’s.

We head south on Saturday, February 13, “To the Land of Southern Belles”, and long story short we’re in Meridian that night. We spend the next day scouting out the Speedway across Mississippi. We don’t see much action but we learn a lot. That’s followed by the next day which is stormy on the beach at Gulf Shores. Then it was time for sunny belles.

We spend Tuesday, February 16 shooting the Speedway between Jackson and Meehan (west of Meridian). We manage to nab belles leading two of the six trains we see. Seven if you count the Rankin Turn.  And I should mention the trip’s prime directive is “Belles”. If its not a belle then we don’t spend much time on it.

Wednesday’s goal is Vicksburg. I’d seen a lot of neat shots in Vicksburg but hadn’t ever been there myself. So we head to Vicksburg and start with the Mississippi River bridge. And we find an eastbound right away, but it’s a pair of grays. We take two shots (the bridge and the tunnel) and head back to the bridge per the Prime Directive.

I should mention that rather than sit and wait at the visitor center, where the eastbound Mississippi River shot is, I take advantage of the bridge’s 10mph speed limit to go west in search of eastbounds as one can easily beat them back to the visitors center. And we again meet an eastbound. This time its a brand new UP GE leading. Again we take two shots, bridge and tunnel.

Next I see, but never photograph, a turn from Jackson (Pearl) that turns at Vicksburg. I do spend about 90 minutes trying, however, to no avail. As it has a NS unit leading it back east I don’t give chase (it had a belle leading westbound). After the wasted effort on the turn we return to the bridge just in time to catch another eastbound, a rail train with two KCS grays. And again the now usual two shots (bridge and tunnel).

We next go to Edwards to shoot a westbound I think is coming and it does, and finally a belle leader! We chase this train all the way to Magenta, LA where we run out of daylight.

Thursday we start the day from Monroe and shoot from there to Shreveport with the bridge at Sibley my main goal. However during my standard morning drive (drive west looking for eastbounds) we encounter “Job 20” switching Simsboro where there are several customers. We finally hit pay dirt as Job 20 has a pair of belle 4-axles. So we spend the morning shooting them till they head back to Monroe.

We then head west and encounter an eastbound with a very dirty belle leading so we shoot it and let it go, a bit of a gamble on my part. We arrive at Gibsland only to be blocked by the Watco’s Louisiana Southern switching. Given the giant size of the train I’m amazed KCS gave this up. We shoot that then continue west to Sibley where we wait which isn’t too bad.  It is in the mid-70’s and sunny. Meanwhile back home its 30 and snow and ice. Oh yea.

An eastbound shows up with grays both front and back. Bummer. One bright thing shooting KCS is the large number of trains with DPU’s which increase one’s chance of getting a belle. So we wait and we finally do get our westbound (first of the day) and my shot. And it’s a belle! We chase to Haughton, east of Shreveport and again we run out of daylight and we return to Monroe for the night.

Friday morning we head east, under cloudy skies. We stop and shoot a westbound at Start, and of course it has a belle. We then shoot an eastbound at Crew Lake but its still cloudy. Then it clears off in a matter of minutes and I think an eastbound is coming. (It was sitting in Monroe). Well we wait and it never shows up. Eventually we head west in hopes of catching up to that belle led train but we don’t. We find a crewless eastbound at Calhoun but at least its belles.

We make our way back to Monroe and end up shooting a local job working the very short branch on the east side of Monroe using the power that Job 20 had. After that we head east in search of westbounds, only we make it to the Mississippi River before we finally meet a westbound, belle led too. So we turn around and chase it till we’re out of daylight at Waverly. Thus Friday turned out to be a super dead day on the Speedway.

Saturday we start in Jackson and as the weather is crappy we head straight home. Thus ends my first big Speedway adventure.
Speedway Belles – Part 2

As luck would have it a week later the forecast looked good and I really wanted more belles so I returned to the Speedway, solo this time. I basically spend Thursday, February 25 driving to Vicksburg via Meridian. While I had a lot of sun, the only trains I did see were grays and not really shootable for me. (You may remember I never did get belles on the Mississippi River bridge.)

Per SOP Friday morning I head west looking for an eastbound but I don’t find one till late morning at Crew Lake when I get a eastbound pig train with a belle leader. I chase it to Shannon (not that far) where it meets a westbound with belles. I actually blow off the eastbound (A, it’s a pig, B, the light is only going to get worse, C, there might not be any more westbounds). The westbound is my ticket to an afternoon westbound chase. And I do chase it to Gibsland where it meets a eastbound. As the eastbound has a belle DPU I chase it east. (Chasing west of Gibsland is even harder than normal Speedway chasing). I run out of light at Monroe but after a slow start it turned out to be a good day.

I start Saturday in Vicksburg and it would be a sunny and dead day. I head west per SOP and make it all the way to Gibsland without meeting an eastbound. Though I do catch up to a westbound I’d been behind all morning. It has an NS leader, a tophat no less. It meets an eastbound with a filthy faded UP leader. Sigh. I head back east looking for westbounds and I make it all the way to  Vicksburg before I meet one. It’s a belle too! Alas it meets that eastbound and by the time all is said and done I’m out of daylight. Arggg.

Sunday I head west from Vicksburg looking for my morning eastbound only nothing. I wait at Crew Lake and a westbound shows up but at least it has a belle. I eventually end up in Calhoun where  the westbound will meet two eastbounds, the first with a belle. I end up chasing the westbound all the way to Haughton. Then its time to drive to Vicksburg as I plan on going home Monday.
​
Monday is mixed sun and clouds. I try one last time to get my Mississippi bridge shot. I’ve even a train with belles, but it’s a westbound. I chase it west in horrible light and it meets a eastbound with a UP leader. I follow it to Jackson then head for home via Meridian. 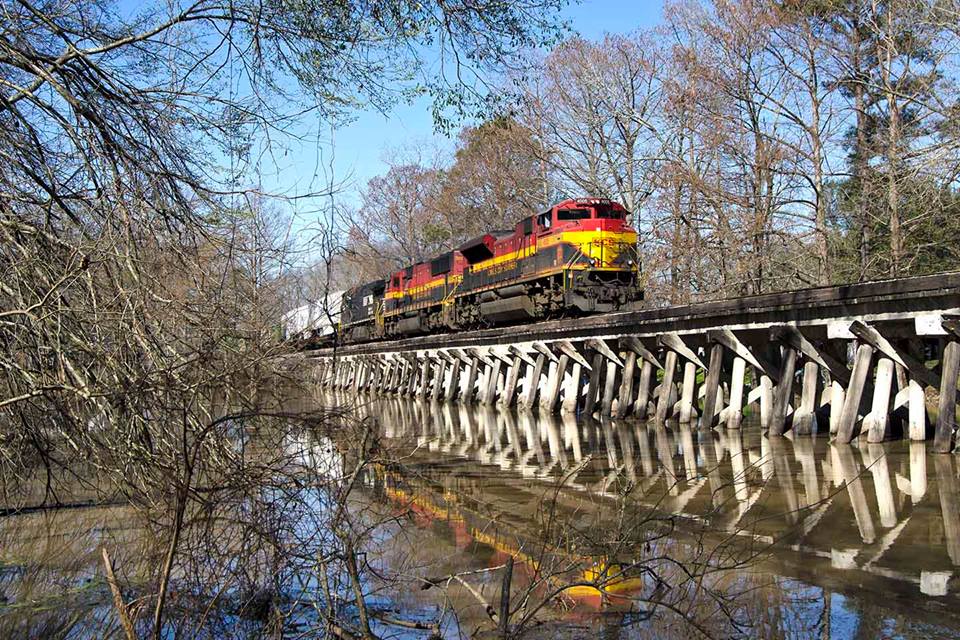