For those who have visited New Orleans to railfan you have probably been directed to Central Avenue.  This road crosses the IC mainline, leads to several yards, and the NOPB main lines between East Bridge Tower and the foot of the Huey P. Long Bridge.  Here most trains operating between the UP and SP to the west and the CSX and NS to the east stopped to change crews.

​On this day we find a westbound train with high-hood NS GP38-2 5129 leading NS SD60 6597 snaking its way through East Bridge Junction before coming to a stop at Central Avenue to change crews.

The videographer here is this my father, Michael Palmieri.

One of the attractions at this location in this era was Danny Bonin’s Iron Horse Hobbies, which catered to modelers and railfans.  This was located on Central Avenue just a few buildings away from the IC mainline and was a great place to hang out between trains!  This clip ends with a video of the shenanigans in Iron Horse Hobbies.  Among the faces are Paul Oliver, Reuben Feuge, Kurt Nastasi, and Danny Bonin!  Those were the Good Old Days!
FaceBook Thread
NS APL Stacks - Meridian, MS - June 30, 1991

On several occasions I would be able to make a round trip from New Orleans, LA to Meridian, MS on the Crescent. We would have lunch at Weideman's and enjoy whatever railroad activity there was between trains.

From this trip I have two videos taken from the rear car of No. 20 between New Orleans and Meridian. In Meridian the only trains videoed were this southbound NS APL stack train and the our ride home, Amtrak No. 19, pulling into the station.
​
Here is the video of the NS train.
FaceBook Thread
NS A47 Local – Slidell to Pearl River – August 19, 1991

Here is a fun dose of railroading action.  Local crews are under a lot of pressure to get work done on-line and get out of the way of traffic.  NS local A47 works south out of Hattiesburg, Mississippi towards Slidell, Louisiana.  On this day we find the train, powered by NS GP38-2 5122, shoving northward by Capitol Steel in Slidell in the rain.

The next scene shows the train shoving by St. Joe Brick between Slidell and Pearl River.  The employee in the gondola is protecting the shove.  Once the crossing is occupied the engineer opens up the throttle.  Another employee is standing on the steps of the NS 5122, ready to pull the pin when they drop their train into the siding at Pearl River.

At the south end of Pearl River we see the drop.  An employee has to run to get on the side of the leading gondola in motion.  Once the cars go by notice there is no locomotive attached.  The entire train was dropped into Pearl River siding.  Right behind the cars we see the engine making a run for the north end of Pearl River on the main track.  The engine will head into to siding form the north end and the train will now be “turned” for its northward journey back to Hattiesburg.
​
And it looks like the crews efforts were just in time as we end the video with a little pacing of a southbound NS train at Pearl River.  I believe many of these activities are frowned upon by the rules groups of railroads today…but once upon a time railroading was an art!
FaceBook Thread
August 19, 1991 – White Flags at Woods

Here is a sequence taken from the back yards of Jim Selzer and Joe Scorsone. Their houses were right next to Woods Siding on the NS NO&NE District on the south side of Slidell, Louisiana. I spent much time here growing up and this is where I developed a passion for the Nathan P-5 horns. The echo through the trees was awesome to witness!

The first train is a northbound intermodal train running on No. 238’s schedule. SD40-2 3212 leads an SD60 – both running long-hood-forward. The train is racing to Pearl River to make a meet with Amtrak train No. 19, the Southbound Crescent.

Next we see NS SD60 6671 displaying white flags as this train is an extra. The train is seen easing through the siding at Woods to meet Amtrak No. 19.

Finally at dusk, Amtrak No. 19 accelerates through Woods on its way to New Orleans.
​
Joe and Jim’s neighbors were not necessarily pleased with their interest in railroading as most of the train crews would whistle off when passing their houses, any time, day or night!
FaceBook Thread
NS 8633 South - Woods - August 20, 1991
A pair of NS C39-8s, 8633 and 8597, lead a southbound Norfolk Southern freight train slowly through Woods on the south side of Slidell. The large block of pipe on the head-end was infrequent, but not unusual, on this railroad.
The video camera rolls for most of the train, offering a glimpse of the freight cars of the location and era. No graffiti!
FaceBook Thread
Displaying White Flags – NS Train No 238 – September 7, 1991

A long-lost art for running trains is Time Table/Train Order operation. Trains had published schedules in the Time Table and there was a flagging process for exceptions. An extra train flew white flags and all sections preceding the last section of scheduled train flew green flags. On locomotives so-equipped, green or white classification lights could be illuminated instead having flags displayed.

If I recall correctly, the SP APL stack train connection would sometimes make connection with the NS and run as a regularly scheduled train, essentially stealing that Time Table slot. Whenever the “regular” train would run, it would operate as an Extra, flying white flags.

On this particular VHS tape there are several examples of NS train flying green and white flags. I am not sure when Train Order operation ended between Meridian and Oliver Junction. NS Alabama Division Time Table No. 8 dated November 26, 1989 advertised the Method of Operation in these limits as Train Order. Time Table No. 13 dated June 19, 1994 lists the Method of Operation as Track Warrant Control between Meridian and X-Tower and then Rule 251 as the Method of Operation between X-Tower and Oliver Junction.
FaceBook Thread
Growing up in the New Orleans area I had exposure to a number of railroads. The Southern, err I mean NS, was particularly important to me however. My uncle Joe Scorsone and his railfan neighbor Jim Selzer lived in Slidell, LA. Both of their back yards were next to Woods siding so the happenings on the railroad were part of the daily routine.

Most of the crews knew Joe and Jim who were sort of part of the railroad family. Railfan Nick Huth was part of this group as well and we spent much time ralfanning on the NO&NE District of the NS. I would look forward to breaks from school to spend time with Joe, Jim, and Nick. Mornings would begin with Amtrak No. 20 and the NS Dispatcher giving a lineup over the radio!

This video is from December 30, 1991. I imagine I was spending some of my Christmas break with Joe. The video begins with an unusual visitor to Slidell, IC 9569 at the interchage with the NS. IC power on the line from Bogalusa was not a common site in Slidell. A northbound NS train with three SD40-2s rolls by and we chase it northward into Mississippi.

At some point, I do not have my notes form this day, this train meets a southbound and we chase it back. There is also a GP50 powered local and a GP38 powered work train in the lineup for the day.

Lots of Nathan P5 horn goodness here! The video ends with Amtrak No. 19, the southbound Crescent, calling at Slidell. Love the sound of the train coming into town--Nathan P5A announcing its passage to all on this cold night. There is a thrill that comes from being on a station platform when a long distance passenger train makes its appearance! And bringing up the rear are three NS business cars making their way to the Big Easy for the Sugar Bowl!

This brings back some fond memories for me!
FaceBook Thread
Birmingham, Alabama was always a favorite place to railfan for me in the early 1990's. The culture of the Southern was still strong, railroading with a sense of urgency, yet the NS identity was clearly imprinted on the scene. This video clip of an NS coal train with all Southern hoppers, a mid-train helper MU'd to a radio-control car, and yes a manned Southern caboose epitomizes this era of railroading in the deep south!
FaceBook Thread
Here is a little more Birmingham, Alabama - May 17, 1993. Busy 32nd Street next to the famous Sloss Furnace is a must-see for those visiting Birmingham. The first train - three GP38 types running long-hood-forward leading an SD60 on a coal train! I forget the name of the tower just south of 32nd Street I did not edit the last train - all 144 of the cars run-by for those interested. Not a bit of graffiti to be found! The KCS airslide covered hopper is my favorite - how about you?
FaceBook Thread
Wednesday September 8, 1993 - NS GP38-2 5181 leads a 3-car train on the Bernadotte Line in New Orleans. 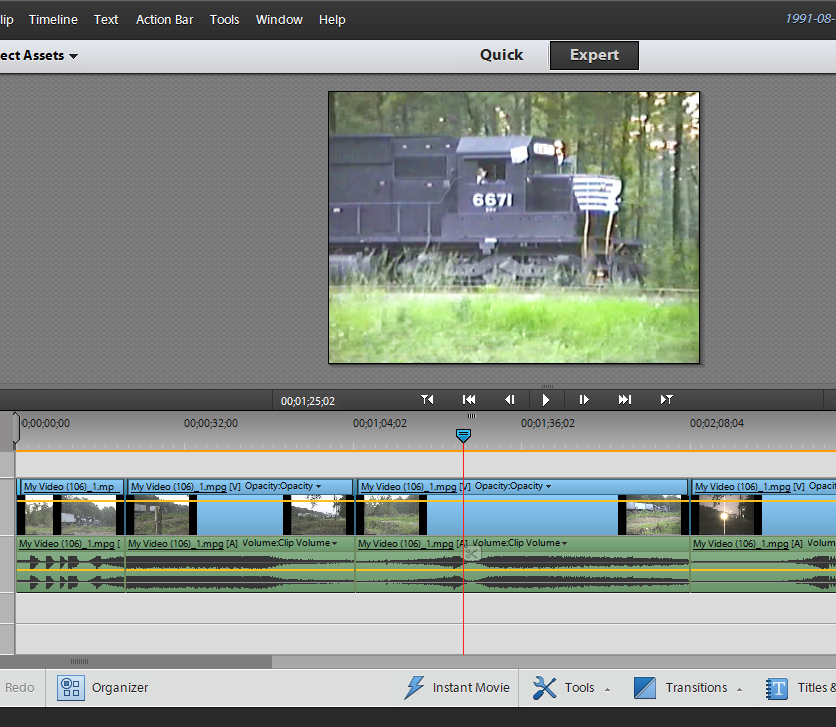