Not Just Another P40 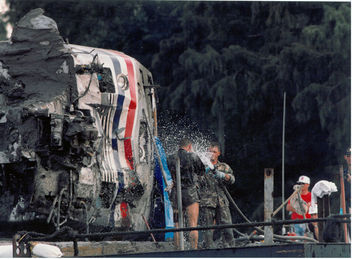 Their builder's plates are labeled Dash 8-40BP, but most Amtrak people identify these units as P40's. The first one rolled out of the General Electric plant at Erie, Pennsylvania in April of 1993, but the units did not enter regular service until June. Their first regular assignment was on the Auto Train between Lorton, Virginia and Sanford, Florida; but all of the units were initially assigned to the New Orleans Union Passenger Terminal diesel shop for maintenance and inspections. The very first P40 in New Orleans was the 806, which arrived here on the Crescent on 15 June for crew and Mechanical Department training.  When Amtrak 819 was photographed leaving New Orleans on the City of New Orleans at 2:40 p.m. on Saturday 11 September 1993, it was the newest P40 in service; but on that day, it was just another P40. The 819 began its first revenue run on Friday evening 3 September 1993 — just seven days earlier — when it departed from Chicago on the southbound City of New Orleans.

The 819 arrived in New Orleans for the first time on Saturday the fourth and remained in continuous service out of here for the next 15 days. It made two trips to Washington, DC and back on the Crescent, two trips to Chicago and back on the City (as seen here), and one more round trip to Washington, arriving back in New Orleans on the evening of Sunday the nineteenth. The locomotive's first day of rest was Monday the twentieth; then, the next evening, it was put on the eastbound Sunset for movement to Sanford, Florida and service on the Auto Train.

At 11:34 p.m. on Tuesday 21 September, the 819 left New Orleans Union Passenger Terminal on the front of train No. 2 — the eastbound Sunset — as the train continued on its journey from Los Angeles to Miami. Behind it were F40's 262 and 312 and eight cars. The train was 34 minutes late because of mechanical problems with one of the cars. Three hours later, the train made its usual station stop at Mobile, still running about half an hour late.

As the Sunset was leaving Mobile, the Warrior & Gulf Navigation Co. towboat Mauvilla was pushing six barges up the Mobile River. Unfortunately, the Mauvilla was lost in dense fog. The tow accidentally turned into Big Bayou Canot and two of its barges struck the CSX bridge. The west end of the girder span was pushed over about 4 feet, placing the south girder directly in the path of train No. 2.

At 2:47 Wednesday morning, the Sunset thundered out onto bridge No. 196. Moving at 70 mph, the 819 struck the west end of the south girder, became airborne, and landed 150 feet away on the north side of the trestle. The locomotive landed nose-first, dove through 15 feet of water, and buried itself halfway into the bottom of the bayou. Both of the F40's, the baggage car, dormitory car, and two coaches followed the 819 into the water. Leaking diesel fuel ingnited, setting the surface of the bayou ablaze. All three of the crewmen on the 819 died, as did two dining car workers in the dormitory car and 42 passengers.

The 819 was removed from the bayou on Friday the twenty-fourth and placed on a barge. One of the submerged coaches was salvaged, but the rest of the damaged equipment was moved to Blakely Island in Mobile and scrapped. The 819 was no longer just another P40; it was the first P40 to be retired. It had worked for Amtrak for just 20 days.