This summer trip was to attend the Santa Fe Modeler's Organization convention in Bakersfield, CA. I had always wanted to visit Tehachapi Loop, and this was my chance!

At the time I was a pretty avid Santa Fe fan and this opportunity was very exciting for me. Shortly after arriving at Tehachapi this hotshot showed up with Santa Fe B40-8W 517 leading the way. A Santa Fe GP30/GP35 helper set assists the train from the rear.

After the Tehachapi sequence we migrate to Caliente and catch the helpers dropping down the hill.

Ten years later I would return to California as an Assistant Trainmaster in Fresno. I was only there for 1 year, 5 months, and two weeks....but who was counting. Things just were not the same. The environment was very hostile. During this time my interest in the Santa Fe turned into an extreme dislike. While in Fresno I would visit nearby Tehachapi only twice. And each time I wasn't sure why I bothered.

Since then I have worked very hard to hold onto the things about railroading that inspired my in my youth. These memories can be very therapeutic.

Twenty years later I would find myself working as Terminal Manager in Lincoln, NE. Here my path would cross B40-8 517 again as she was one of a handful of unique 4-axle locomotives assigned to the Nebraska Division for local service. I recognized this locomotive immediately as I had made a large poster from a slide I took of her on Tehachapi. This image hung on my wall for many years. While working in the heat of battle, it was comforting to see this locomotive as it triggered this memory from a very different time and place. The 517 was one of my pet locomotives on the Nebraska Division.

I am pleased to have come across this video from 1991 of the 517 doing what she was built to do...with class and style.
FaceBook Thread
So I came across this video - something a little different. And the videographer...my Mom! In June of 1992 we took a family vacation to Kansas City to attend a KCSHS convention. Among other things, we got to visit Sheffield interlocking before the flyover was built. Anyway, I believe I had to do some negotiating to schedule some days to railfan the Santa Fe after the convention. At the time I believed the Santa Fe was the greatest railroad in the world..and from the scene of the four Warbonnets at 3:49 in this video it is hard to think otherwise!

​The result was a couple of days between Kansas City and Galesburg. The scenes on this video were taken on the Santa Fe Marceline Subdivision between Camden, MO and Carrollton, MO where it is paralleled by NS Moberly District and in places serves as a third main track. Since I am in a few of the scenes, as is my Dad, that leaves my Mom as the photographer here. And my orange shirt...no, not high viz in 1992...just representing the swampland with my Louisiana and Delta T-Shirt! Anyway - thanks Mom and Dad for the time on the Santa Fe Transcon while there still was one. Ten years later I would revisit this area while working as a BNSF trainmaster at Argentine Yard in Kansas City. It just wasn't the same, though it would be how I met Dan Munson and Stephen Priest!
FaceBook Thread
Today's video clip is from August 1995. It looks like I made a road trip from New Orleans, LA to Temple, TX to catch some SP and ATSF action. This clip begins with some pace scenes of Santa Fe Rustler Springs, NM to Galveston, TX unit sulfur train URSGV-1-18. Power is SF30C 9564 leading Warbonnet C40-8Ws 807 and 902 with 97 TGIX, DVLX, and HOKX tank cars in tow. These scenes were taken near Kenney, TX on 8-20-1995. 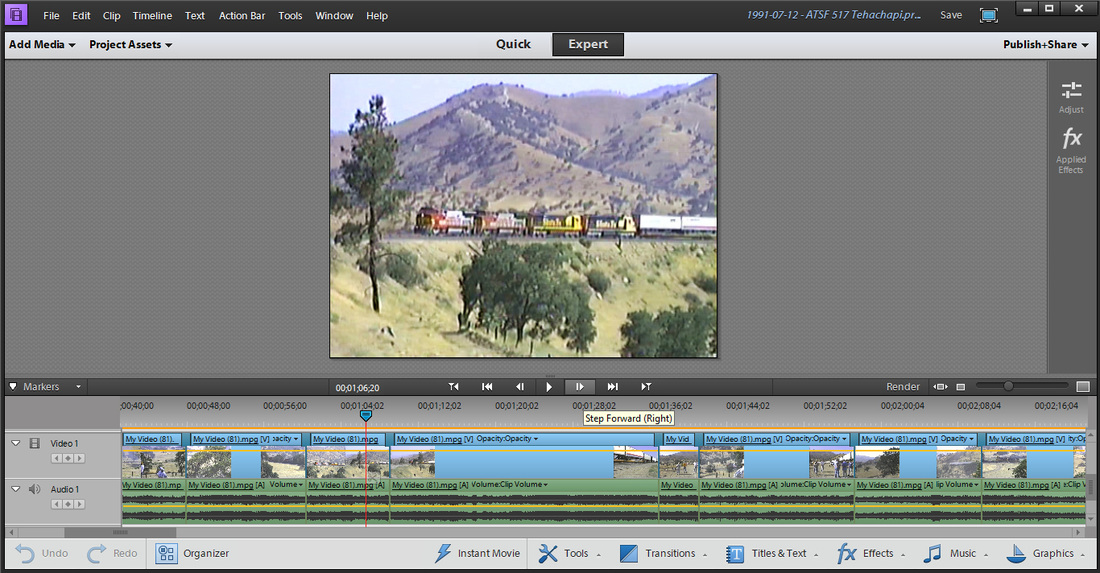