Santa Fe’s CF7 diesel-electric locomotives are an important part of the story of the resurgence of shortlines in the last decades of the 20th century. After their release on the second-hand locomotive market in the early 1980s, they became almost as common on shortlines as the ubiquitous General Electric 70-tonners were several decades earlier.

My first acquaintance with CF7s came in the early 1970s while I was Vice President and General Manager of the Sabine River & Northern Railroad Company at Mulford (Orange) Texas.  During this time I had frequent need to visit a new plant which Owens-Illinois, SR&N’s parent company, had built at Jasper, Texas on the Santa Fe’s East Texas Longview line. Santa Fe normally used two Geeps to boost braking for faster switching.  It was fascinating to watch a pair of the shiny new CF7s briskly switching on the new plant lead, which was built around a curve on a high fill, and coming to a smooth stop before coupling to cars at the loading docks.

When word of the CF7 program got out, SR&N’s shop foreman and I discussed buying one or two F units and converting them to Geeps or road switchers in our shop to replace our two aging Alco 539s.  For the same reason that Santa Fe’s fleet of F’s was available for conversion, similar units were on the market at prices well below GP7s or even RS2s and RS3s.  For reasons now long forgotten, better judgment prevailed and the idea was never pursued, possibly because of the structural problems of the car body frames.

My first experience as a user of CF7s was after I became president of the Ashley, Drew & Northern Railway at Crossett, Arkansas in 1976.  The AD&N was a wholly owned subsidiary of the Georgia-Pacific Corporation.  As G-P’s senior railroad manager, I was often called upon to provide alternatives for preserving or restoring service on lines that Class 1 railroads had abandoned. Most often I would anticipate the need and offer a solution to the company that would not only restore service but yield a good return on the investment.  Such pro formas were never questioned and so we moved forward with them.
Illinois Central Gulf put its Valley Line between Crosby, Miss., and Slaughter, La., up for abandonment in 1984.  Although the Interstate Commerce Commission held hearings in which shippers, including G-P, gave testimony of the adverse effect that would result from such abandonment, the Commission approved the ICG’s request.   For several months, two different third parties tried to put together deals to acquire and operate the abandoned line and restore rail service to Georgia-Pacific.  After it was evident that neither of the third parties could close a deal, I stepped up with a proposal for Georgia-Pacific to buy the line between Gloster, Miss., and Slaughter and operate it as a shortline railroad.
The ugly and unglamorous CF7s were equally at home as single units switching the large forest products manufacturing complex at Crossett or coupled for the 41-mile local turn to Monticello, Arkansas with 60 to 75 car trains at speeds up to 35 miles per hour on roller coaster grades.  Their awkward appearance seemed to be somewhat alleviated when we coupled two units back to back or with another locomotive model.  A CF7 and SW1500 combination was an unusual but impressive sight.
The AD&N CF7s were also at home on its 57-mile sister company, the Fordyce & Princeton Railroad between Fordyce, Ark., and Crossett.  Formerly a Rock Island branch, the Rock Island had engineered the line to passenger train standards with plans to extend the line from Crossett to New Orleans.  Thus the F&P boasted light grades and passenger train curves on ribbon rail which allowed a pair of CF7s to hurry along with 50-car trains loaded with plywood pulpwood, logs, hog fuel, plywood cores and woodchips from the forests around Fordyce to G-P’s mills at Crossett.  After rehabilitation with welded rail surfaced and lined on new crossties and ballast, F&P’s tracks were at the Class 3 level under Federal Railroad Administration standards, good for speeds of 40 miles per hour for freight and 45 for passenger trains.  Likewise, the two Gloster Southern units ran like clockwork down the former Illinois Central Valley Line.

Following abandonment of the Ashley Drew & Northern Railway in 1996, its pair of CF7s and other locomotives were transferred to the Arkansas, Louisiana & Mississippi, another shortline that G-P formed in 1991.  The AL&M runs between Monroe, La., and Crossett and its locomotive fleet operates in a pool with the Fordyce & Princeton Railroad. 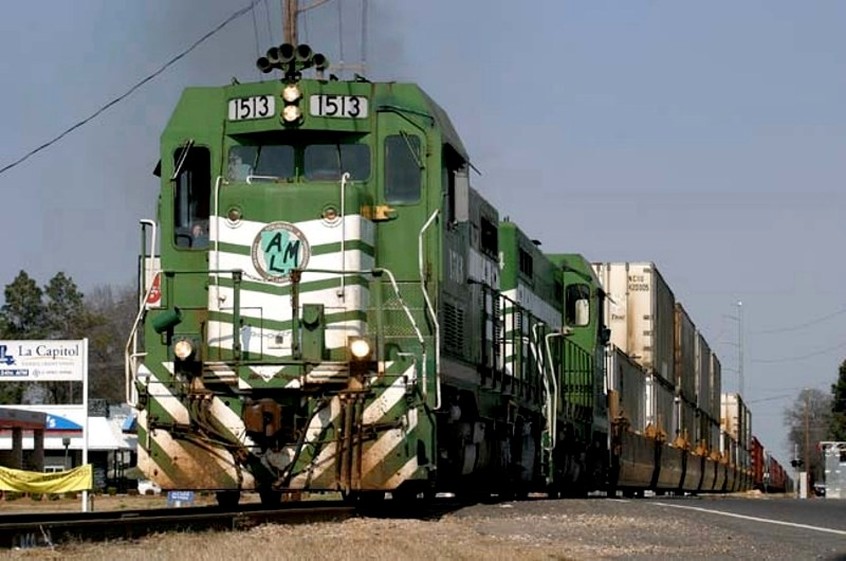 AL&M CF7s 1513 and 1514 lead a northbound freight as it crosses the southbound lane of Highway 165 at Monroe, La., en route to Crossett with a cut of intermodal container cars on the head end in this February 17, 2004 view.  Russell Tedder Collection
Experience in the years following proved that purchase of the four CF7s proved to be one of the best locomotive decisions I ever made.  With little repair and upkeep, and simplified maintenance, they proved to be more reliable than other units on the roster.  Other owners have reported similar success over the years.

When I retired in 1997, the four CF7s were dependably and predictably continuing their daily chores.  The ungainly workhorses continue to ply shortline rails well into the 21st century. 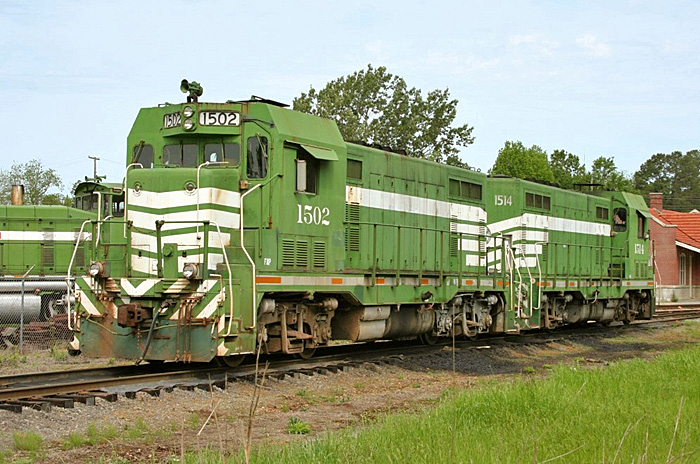 A&LM CF7s 1514 and 1502 are on Fordyce & Princeton mainline (former RI) at F&P (also former RI) station at  Fordyce, AR on February 26,  2008 ready for that day’s run. The classic Tedder Green paint has faded after four years ownership by Genessee & Wyoming Inc.  The new owner also did not see fit to apply the AL&M herald. The Fordyce & Princeton bought the 52 mile Rock Island line between Fordyce and Whitlow Junction, Ark., from the bankruptcy trustee in 1981.  The transaction included five miles of trackage rights over the Ashley Drew & Northern from Whitlow Junction to Crossett, Arkansas. Gloster Southern bought CF7s 1501 and 1502 from the Santa Fe’s Cleburne Shops in 1996 for its then new 35 miles line southward from Gloster, Miss., to a connection with the Illinois Central Gulf at Slaughter, Louisiana.  Due to permanent closure of the Georgia-Pacific plywood plant at Gloster, the line was abandoned early in the 21st century.  At that time CF7 1502 was sold to the affiliated Arkansas Louisiana & Mississippi Railroad.  CF7 1501 was scrapped during this time.  Jim Shaw photograph, Russell Tedder collection. 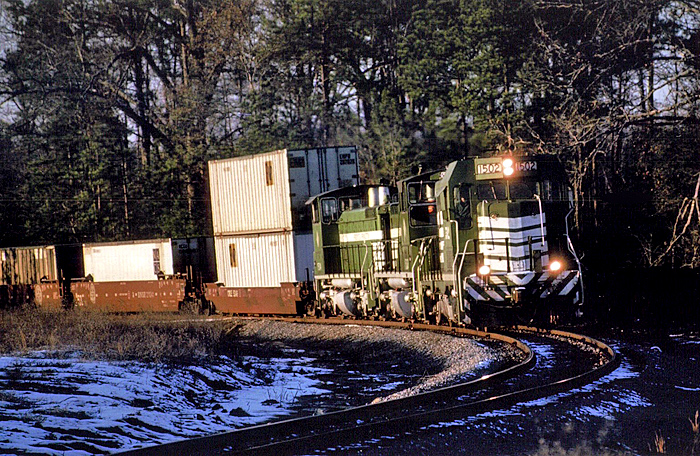 In the shadows of the dense pine forests along the Arkansas Louisiana & Mississippi Railroad, AL&M CF7 leads Fordyce & Princeton SW1500 1503 on a southbound stack train around the curve at Rolfe Junction, Ark., in this 2001 scene.  AL&M’s earliest predecessor, the Arkansas Louisiana & Gulf Railroad, ran from Monroe, La., north to Hamburg, Ark., 57 miles.  A five mile Crossett branch ran from Rolfe Junction in the opposite direction of this train to Crossett, Arkansas. At that time this was the Rolfe Junction connection to Crossett.  The AL&G mainline extended northward in the bottom right of this picture to Hamburg. After the Rolfe Junction to Hamburg mainline was abandoned in 1920, this leg of the wye became the mainline to Crossett. Note the snow on the ground.  Dan Schueth photograph, Russell Tedder Collection 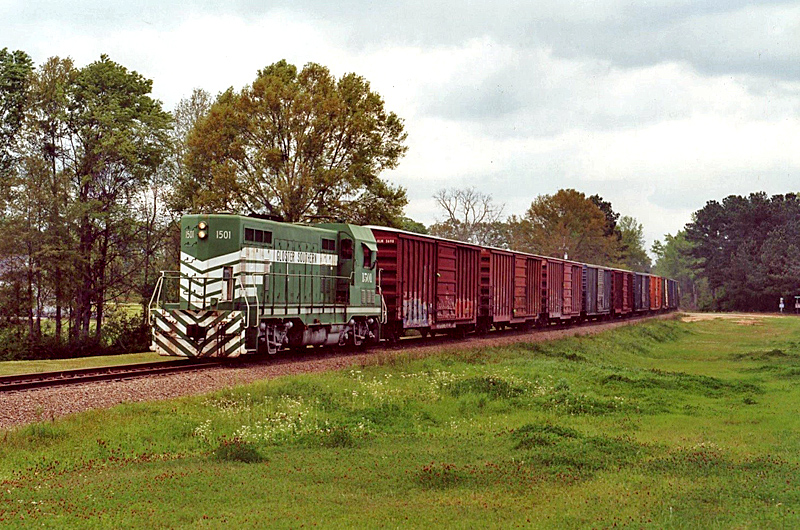 Gloster Southern CF7 1501 leads a southbound freight through Norwood, La., en route from Gloster, Miss., to the Illinois Central Gulf interchange at Slaughter, La., in this April 2, 2001 scene.  Note the manicured right of way that was a trademark of the G-P railroads. The Gloster Southern was not included in the sale of G-P railroads to Genesee & Wyoming. Jim Shaw photograph, Russell Tedder Collection 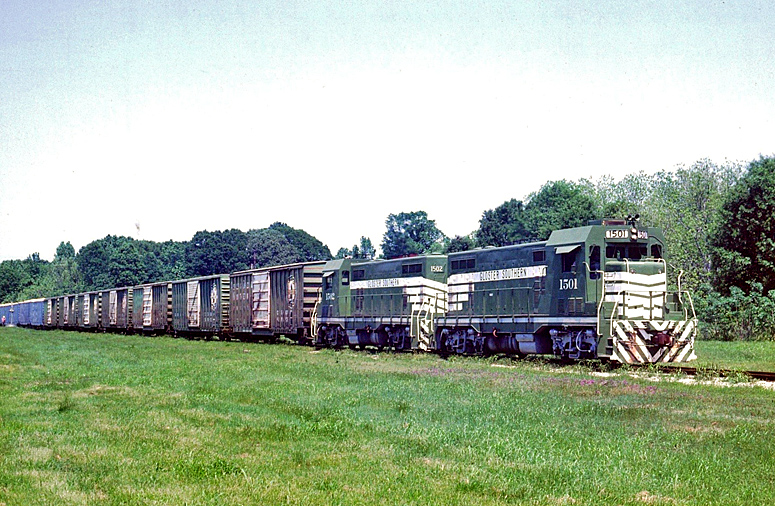 In this April 27, 1988 scene, a  lashup of Gloster Southern CF7s 1501 and 1502 lead a southbound freight through Wilson, La., en route from Gloster, Miss., to the Illinois Central Gulf interchange at Slaughter, La., with a train of loaded plywood in boxcars and  woodchips in solid bottom gondola cars.  Note the manicured right of way. Steve Glischinski photograph, Russell Tedder Collection 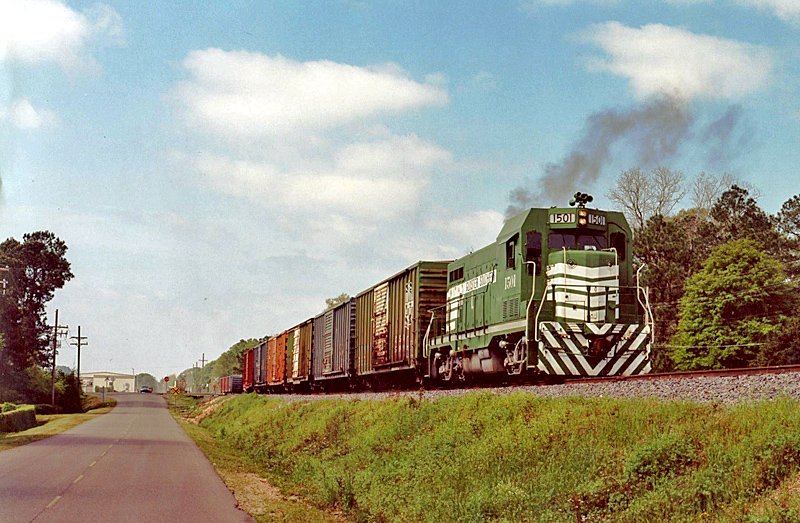 In this April 2, 2001 view, Gloster Southern CF7 1501 is switching at Gloster, Miss., to make up the southbound train that will soon depart from Gloster with a train of loaded plywood cars to the Illinois Central Railroad interchange at Slaughter, Louisiana.  Jim Shaw photograph, Russell Tedder Collection 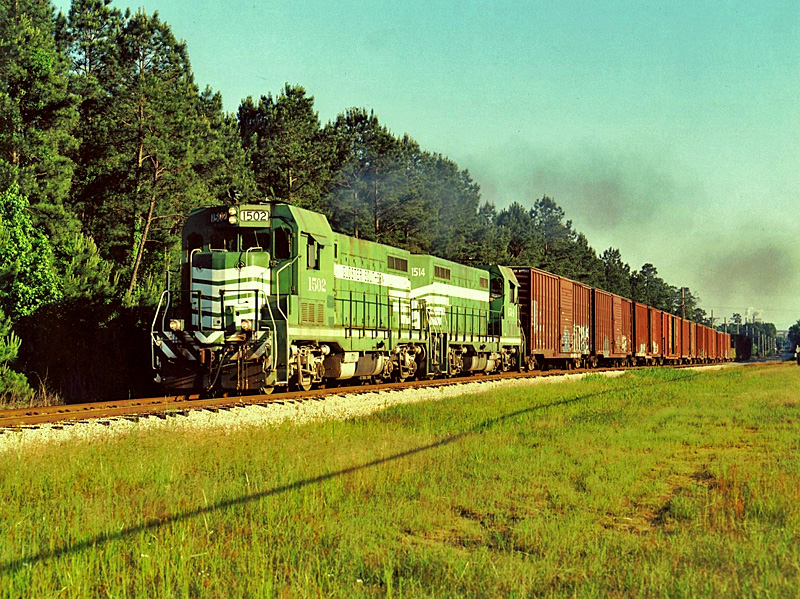 In this May 2005 scene, Arkansas Louisiana & Mississippi CF7 1502 (still lettered Gloster Southern) and AL&M CF7 1514 are handling a cut of boxcars at Crossett, Ark., from the Georgia-Pacific paper mill to converting plants on the Venice Line industrial lead just south of Highway 82. Three plants were located in the industrial district. Georgia-Pacific’s Extrusion Plant which applied wax coating on bleached foodboard (a paper product) made at the Georgia-Pacific paper mill. The board was used to make products such as milk cartons and frozen food containers.  The Bemis Bag Company bought bag paper from Georgia-Pacific and converted it into paper bags which it shipped out via the AL&M.  Finally, the Alton Box Board Company plant bought paper from G-P and converted it into cardboard tubing.  Jim Shaw photograph, Russell Tedder Collection 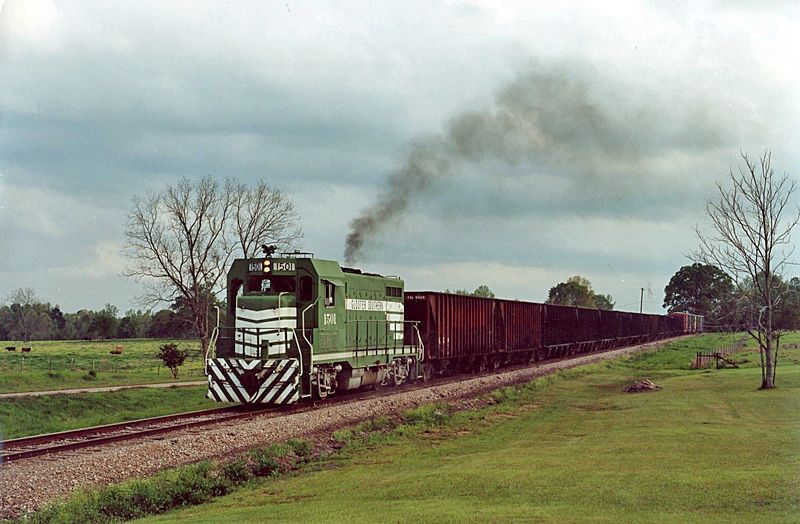 In this April 2, 2001 view, Gloster Southern CF7 1501 is “smoking it up” at 35 mph through Whitaker, Miss., approaching the northbound ruling grade on its run from the Illinois Central Gulf interchange at Slaughter, La., to Gloster, Miss., with 12 heavy carloads of ballast on the head end for use in upgrading the line.  While the speed limit is 25 mph, an exception is made for three miles in either direction when necessary to get over the ruling grade. Jim Shaw photograph, Russell Tedder Collection 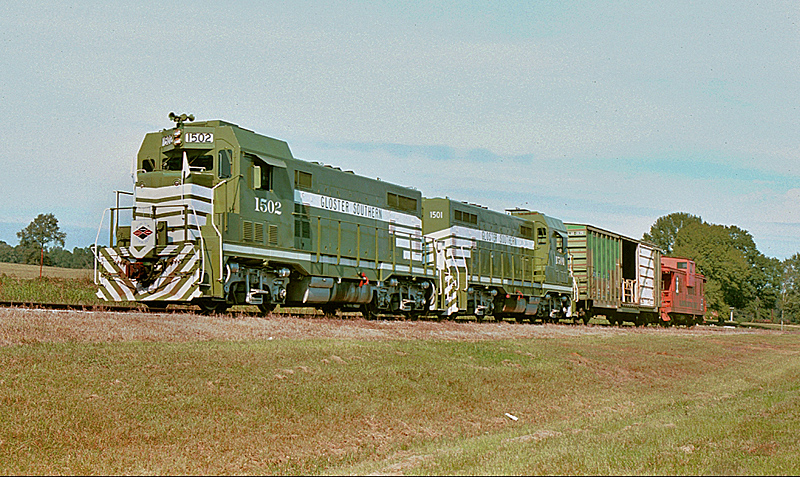 The Gloster Southern Railroad was originally owned by the Georgia Pacific Corp. and began operating over 35 miles of former IC/ICG track -- between Slaughter, Louisiana and Gloster, Mississippi -- in August 1986. This was a part of the former Yazoo & Mississippi Valley main line between New Orleans and Memphis via Baton Rouge and Vicksburg. On Saturday 15 November 1986 the railroad hosted a fantrip for the Southeast Louisiana Chapter of the National Railway Historical Society. The trip ran ran from the north end of the railroad at Gloster -- site of a GP plywood mill and the reason for the railroad's existence -- south to the ICG connection at Slaughter and back again; with several photo runbys and a lunch stop at Ethel, Louisiana on the northbound trip.

The train consisted of GLSR CF7's 1501 and 1501, GLSR box car 1635 (ex-AD&N) and ex-ICG caboose 199452, still with all of its ICG lettering. The railroad had constructed benches and retractable steps in the box car for the comfort and convenience of the passengers! Here is the southbound train on the photo runby at Whitaker, Mississippi; between Centerville (milepost 320.4) and Norwood (329.7). GP stopped operating the railroad when the mill closed, and it was subsequently sold to V&S Railway, LLC of Salt Lake City.  Michael M. Palmieri photo 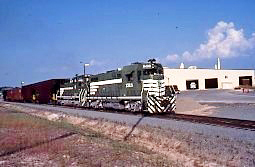