Library Main Page
WebMaster's Notes - Louis R. Saillard is a long-time friend and published author.  Mr. Saillard had previously researched, authored, and published the below factual story. Thank you Louis for allowing this work to be shared in the Meridian Speedway Library!

All images below by Louis R. Saillard

Crown Zellerbach Corp. RS1 No. 302 at Corbin Road east of Hammond, LA - January 4, 1969.
As the great sawmills of the South cut the region’s stands of virgin timber, vast areas of cutover land remained undeveloped.  While many companies organized subsidiaries to sell this land to farmers, much of it proved suitable for only one crop, trees.  Fortunately the mild climate and long growing season of the South made reforestation a viable alternate.  Cutover land planted with seedlings of slash pine would produce pulpwood suitable for paper production in just fifteen to twenty years.

The Great Southern Lumber Co.’s huge sawmill at Bogalusa, La., consumed the trees from 20,000 acres of land each year, and by the early 1920’s less than twenty years worth of virgin timber remained available on company lands. 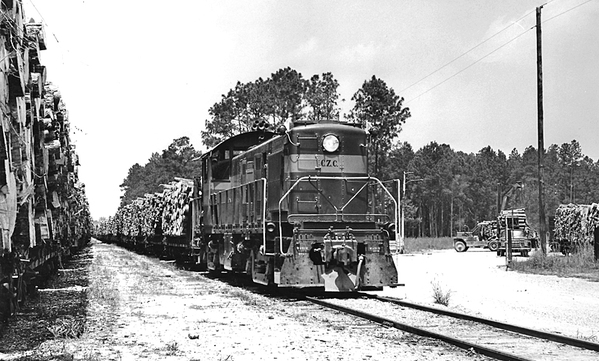 Crown Zellerbach RS1 No. 302.
But unlike most sawmill towns, Bogalusa was intended to be permanent.  To help perpetuate the operation, Great Southern Lumber opened the Bogalusa Paper Company in 1924.  The new papermill initially produced 60-tons of paper a day, using mostly small trees originally left in the forest or mill waste previously burned as scrap at the sawmill. The new plant required a thousand cords or pulpwood a day and produced enough paper and container board to circle the globe every ten days with a four foot strip.  Through merger and sale, Bogalusa Paper  became the Gaylord Container Company in 1937 and the Crown Zellerbach Corp. in 1955.

To supply the huge amounts of pulpwood required by the growing Bogalusa Paper operation, the company started acquiring its own fleet of pulpwood cars in the 1920’s.  The fleet had grown to 309 “woodracks” by 1947, and the last additions were ten fifty-foot steel cars bought new in March of 1969.

To expedite the shipment of pulpwood from the west, Gaylord purchased twenty miles of track between Hammond and Covington, La., on July 31, 1941, for $45,000.  The line was Illinois Central’s old Baton Rouge, Hammond & Eastern branch which had been built in 1908 and abandoned on March 1, 1934.  For a few years after abandonment, the line was leased by the Natalbany Lumber Co. which ran pulpwood trains to Bogalusa from its operations just north of Hammond.  The regular locomotives on this run, incidentally, were Natalbany Lbr. Nos. 101 and 201, an almost matched pair of  Alco 2-8-2’s.   The 201 would later operate on the Denkmann Lumber Co. log train from Canton, Miss., to Florenville, La. 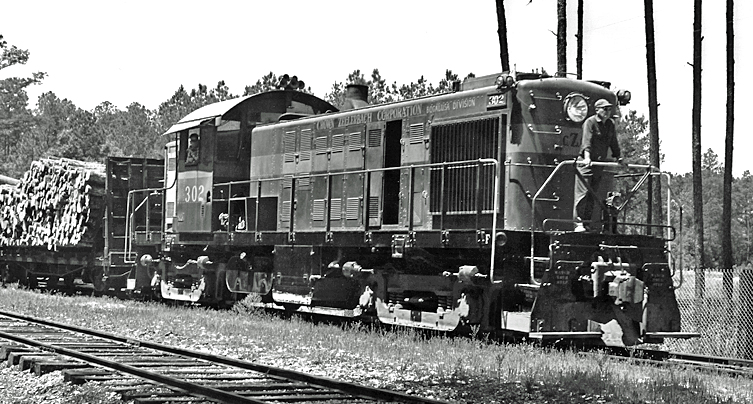 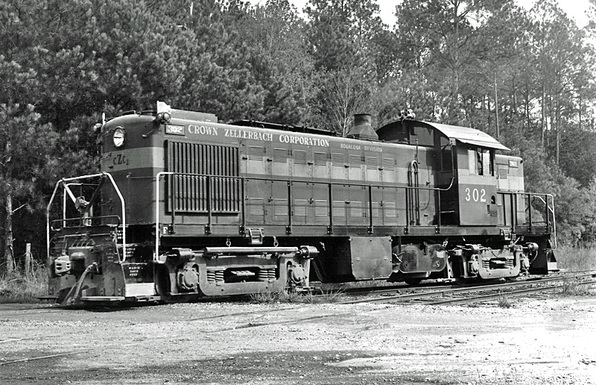 Gaylord Container then began to operate its own solid pulpwood trains from Bogalusa over the GM&O mainline to North Slidell, over the GM&O Shoreline Branch to Covington, and over the newly-acquired track to Hammond.  In all, it was a 126-mile round trip.  By supplying its own locomotives and crews, it was also an economical arrangement, with Gaylord paying GM&O only $2.75 per car in freight charges.  This was raised periodically over the years, but remained as low as $3.96 per car in 1949.

While Gaylord owned switch engines at the Bogalusa papermill, it owned no suitable road engines for the new mainline run.  According to L. M. “Mac” Arnett, long-time conductor of the train, the first run to Hammond was made using Great Southern Lbr. No. 9, a 2-6-0.  Waiting on the Illinois Central interchange at Hammond was a string of  Clinchfield Railroad flatcars and gondolas purchased for conversion into woodracks at Bogalusa.  The new wye track had not been completed on the line at Hammond, so 2-6-0 No. 9  was turned at Covington and attempted to back the 20-miles to Hammond.  Unfortunately, it derailed on a grade crossing at Goodbee, overturning the tender and making the first run very memorable. Gaylord then purchased a World War I vintage ex-U. S. Army “Pershing” 2-8-0, No. 301, from Birmingham Rail & Locomotive on February 28, 1941, and it became the regular engine for the next few years.

The terms of Gaylord’s purchase agreement with Illinois Central stipulated that the line would no longer be a common carrier, and that only unprocessed wood products and sawmill refuse would be handled.  But, World War II appeared shortly after the beginning of Gaylord’s operation, and the small airport just east of Hammond became an important military training location. ​ 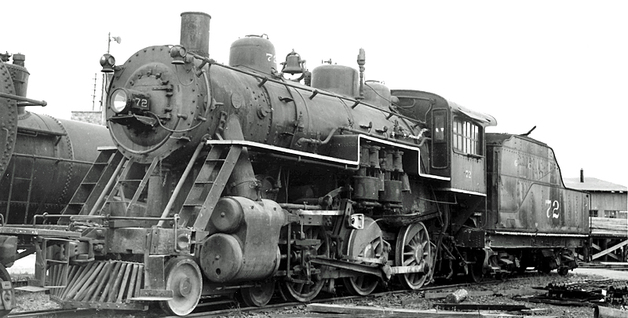 An agreement was reached by which the Illinois Central would operate over the Gaylord railroad for two miles to deliver aviation gasoline to the airport.  This trackage rights agreement would end after operations at the airport were scaled down in 1945.  But the ICRR, always on top of operational details, continued to carry the notation, “Engines and trains will operate over the Gaylord [later Crown Zellerbach] railroad east of Hammond . . not exceeding a speed of 10-miles per hour” in its Louisiana Division employee timetables until 1971.

While No. 72 was not a part of the pulpwood operation for a long time, it does figure in one of the few tales which have survived.  Engineer Horace T. Knight recalled that the crew was returning to Bogalusa late one rainy Saturday evening when they stopped to take water at Talisheek, sixteen miles from town on the GM&O mainline.  On trying to start the train of heavy loads on the wet rail, No. 72 slipped, neatly breaking both siderods behind the main driver.  No. 72 had suddenly converted herself into a 4-4-2.  By the light of the engineer’s torch, the crew succeeded in removing the dangling parts from the engine, and put the train out of the way on Talisheek siding.  The crippled locomotive and caboose then, in the best of logging railroad tradition, limped home un-assisted.

But water tanks and steam servicing facilities were getting rare on the GM&O by 1948, so Gaylord dieselized the operation that May with the purchase of a pair of  Alco RS-1’s numbered 302 and 303. The locomotives came brand new at a cost of $117,000 each. 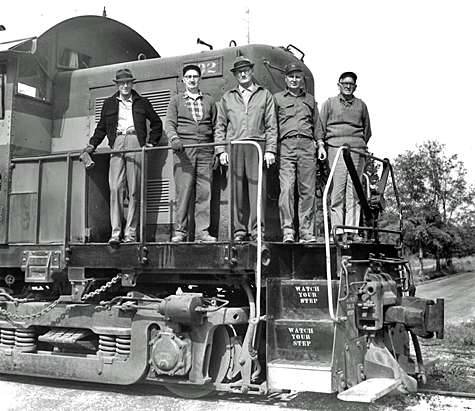 Crown Zellerbach Train Crew on RS1 No. 302 - Hammond, LA - November 29, 1968. (Left to Right) C.R. Ronning - Head Brakeman, Ivy Simmons - Rear Brakeman, L.M. "Mac" Arnett - Conductor, George Reid - Fireman, Horace T. Knight - Engineer.
After dieselization, little changed over the next twenty years.  One RS-1 could handle 45-loaded pulpwood cars and a wooden caboose, and generally did so on three round trips a week.  Mostly the loaded cars came from the ICRR interchange at Hammond, or from a company owned pulpwood yard at the wye just east of town.  Occasionally the train left Hammond with only 37 or so loads and picked up the remainder at a woodyard on the private line at Goodbee.

Conductor “Mac” Arnett’s train book survives from 1966 giving details of the pulpwood train operation at that time.  The train was then leaving Bogalusa about 5:45 am, was at Hammond by noon and returned to Bogalusa about 6:30 pm.  Along with mostly routine runs, Arnett’s notes record CZ woodrack No. 904 being set out with a hotbox at Mandeville on November 17th and woodrack No. 825 losing about half its pulpwood load and being set out a Mandeville on December 22nd.  On November 15th, Alco No. 302 suffered an engine failure near Lacombe and the crew spending over three hours making repairs.  Return to Bogalusa that night was at 10:25 pm.

The original wooden caboose, not numbered but identified as caboose “A” was reportedly a former GM&N car.  It was replaced in the 1950’s by caboose “B” another wooden car purchased from a used railroad equipment dealer.  For awhile in the 1960’s the operation boomed while Crown Zellerbach attemped to salvage large amounts of timber west of Hammond which had been damaged by a hurricane.  During this time the train ran six days a week.  A GM&O RS-2 appeared on the train for a short time in the summer of 1966 while one of the Alcos was ailing, but generally through the years one unit ran to Hammond on the wood train while the other switched the Bogalusa papermill. ​ 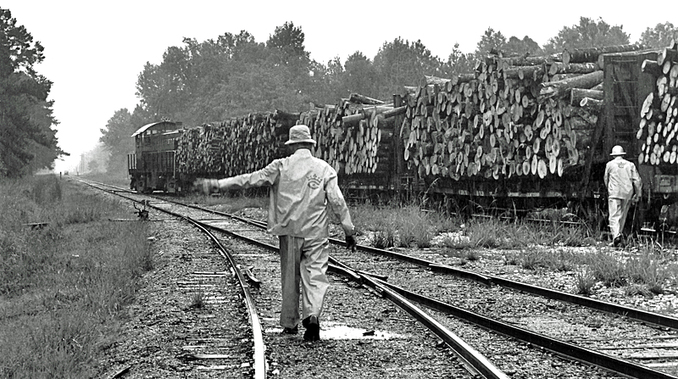 Mac Arnett and Ivy Simmons switching cars - Hammond, LA - August 6, 1968.
In August of 1969 Hurricane Camille struck the State of Mississippi with tremendous force, causing huge losses to the timber industry.  To reduce these losses, Crown Zellerbach began using more  Mississippi timber, hoping to salvage as much as possible before it was ruined by insects.  Pulpwood from Hammond and the west was to diverted to other papermills and operation of the CZ railroad was “temporarily” discontinued.

The ten man section gang continued to maintain the 80-lb rail and bridges and Alco No. 303 ran to Hammond as late as June of 1970 to deliver a few cars to the ICRR, returning with only the caboose.

But Crown Zellerbach was pleased with the new method of pulpwood acquisition for the Bogalusa mill and conversion of the mill to use increasing amounts of wood chips diminished the pulpwood hauling.  Instead of re-opening the line, CZ announced its intention to abandon the track just before Christmas 1970.  Bids for scrapping the track were accepted until January 10, 1972, and the first rails were removed just west of Covington that June.  In all, 18.6 miles of track were removed, leaving only the wye and the woodyard east of Hammond to be serviced by the Illinois Central.

Gaylord 4-6-0 No. 72 was stored at Bogalusa until 1960 before it was sold to the gravel hauling Washington-Western Railroad on the GM&O Bogue Chitto Branch near Franklinton.  It operated there until the mid-1960’s and is now displayed near the Fairgrounds in Franklinton, the last New Orleans Great Northern steam locomotive extant.  Caboose “B” is now displayed next to the old GM&O depot at Bogalusa, incorrectly lettered for the New Orleans Great Northern.    Alco RS-1’s No. 302 and 303 were later transferred to another Crown Zellerbach papermill at St. Francisville, La., where they were scrapped in the early 1980’s. 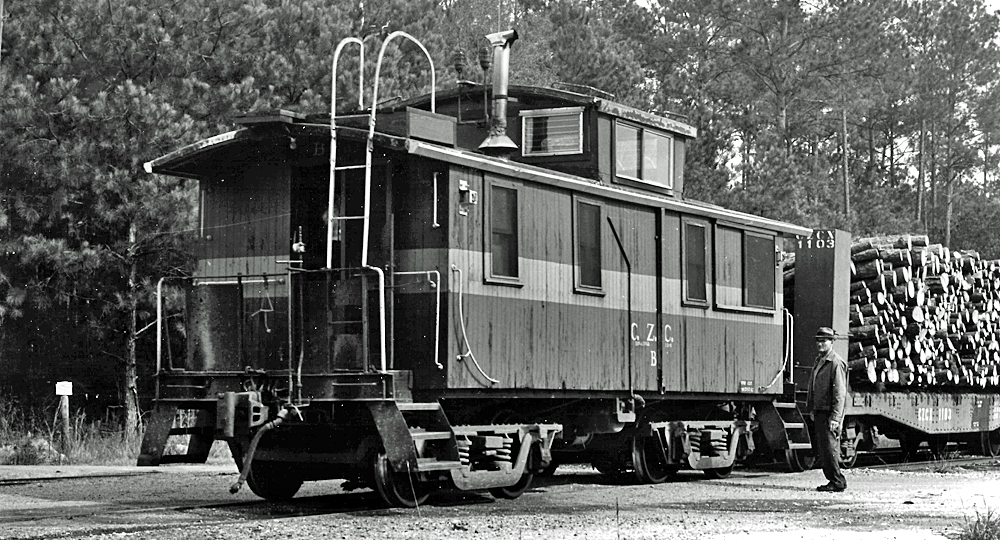 Images by Louis R. Saillard.  Captions in article above.