Edited from a Presentation by Dean Ferris
Railroading involves the movement of trains from origin to destination.  On many railroads, and model railroads, unit trains and overhead bridge traffic are easy to route to destination as the entire train stays together.  For trains that do block swapping, have on-line set outs to switch, or terminate on-line to be switched, the inventory must be examined at the individual car level to ensure that all of the cars are switched into the proper blocks and added to the proper trains to be routed to the correct destination.

This process of identifying where individual rail cars go and which trains they need to ride to get there is called "Car Forwarding" in the model railroad world.  The hobby has a number of systems from computerized routing (with JMRI being the current software leader) to Car Cards to Car Tags.

Dean Ferris chose to use Car Tags on his N-Scale Oregon Joint Line for several reasons.  Car Cards and JMRI-type systems require the operator to be able to read the individual Reporting Marks and Road Number on every car.  This is impracticable in N-Scale because these markings are very small.  Not only are the car numbers often to small to read in the N-scale operating environment, but many N-scale modelers do not take the time to re-number duplicate pieces of rolling stock because of the difficulty involved and the likelihood that no one will ever notice.

From the perspective of terminal operations, trains that either terminate at that location or set out blocks of cars to be switched at that terminal need to be examined at the individual car level.  The image below is a graphic representation of three trains arriving at a location with cars carrying a common yard block, or destination, being colored a specific color.  This graphic representation which is used by terminals on a prototype railroad is not unlike the actual view of model trains in a rail yard wearing car tabs.

Blocked Rail Car Classification Tracks
The above graphic image is a representative view of how cars might look in the bowl or classification tracks of a switching yard.  In a perfect scenario each track would contain one single pure block; however, that usually is not the case.  Tracks can be impure either due to switching errors (hump mis-routes, switch list errors, or strangers in track), more blocks to switch than available tracks forcing multiple block-to-track assignments for a single track, or otherwise intentionally for train makeup/haz-mat compliance switching.  Car tabs allow the yardmaster or operator to quickly visualize the purity of each track.

A yard is a fluid entity where it is sometimes necessary to swing yard blocks from one track to another mid-stream as the volume of specific blocks fluctuate.  In the modeling world car tabs allow the tracking system to follow the cars with no clerical functions needed. With a car card system the cards must be reshuffled and moved into the appropriate pigeon hole as cars are moved from track-to-track.  With a computerized inventory system such as JMRI, the cars must be switched in a computer system and new lists printed in order for the yardmaster to have accurate lists to switch.  In the fast-paced environment of an operating session where the seconds click by quickly on a fast clock, the computerized system is often the least user friendly.

Analysis of the cars at this level shows that when pulling track 2036, the second-to-last car should be kicked out to track 2038 to make that block pure.  If there is not much lead time available when pulling track 2037, a decision might be made to make one set out of the fifth through the seventh cars to track 2038.  This would quickly create a pure block for the pink destination and line up a couple of grey block cars in the process.

Blocked Departing Trains
The final product of any rail yard is a departing train.  Looking at the inventory in this manner shows the accuracy of the built trains. The trains represented in tracks 791 and 793 seem to have good, solid blocks of cars.  The train in track 794 has mixed or "mined" blocks of cars.  Generally this is an indication that this train will have to be re-switched at a rail yard closer to destination where individual classification tracks can be dedicated to each of these blocks.

Car Tabs give the operator or yardmaster one final view at this level to ensure that the right cars are on the right train.  This provides one last opportunity to set out an errant car before departing it on the wrong train.

The goals set forth by Dean Ferris when developing his Car Tab car forwarding system are all geared toward ease of operation to enhance the overall experience:

1) A system with a high degree of flexibility
2) Limit the negative visual impact of the tags
3) Simple to use, easy to learn
4) Allow yard operators to keep up with the pace of traffic on the mainline

The System Developed for the Oregon Joint Line

The tags themselves are made from styrene I-beams cut to 1/2 inches in length.  These 1/2 inch "Car Tags" are then colored with a specific pattern.  Each pattern represents a specific destination matching a key located on the fascia of the railroad by switching leads. Both sides of the tag are used, each generally colored with reverse routing instructions allowing each car tag to function as a two-cycle waybill.

There are four yards with assigned yard operators on the Oregon Joint Line.  Each yard has a “switching guide” posted to instruct operators in the proper classification of individual rail cars.

The pattern of the tag marking, the color of the pattern, and number (for industry spotting) on the tag all have a purpose. 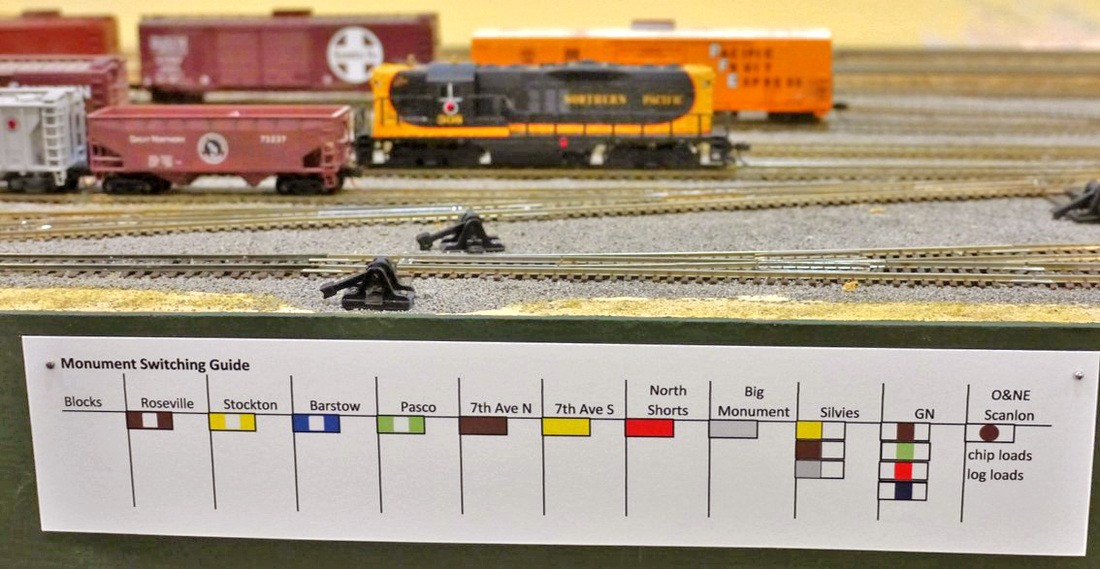 NP Silvies Yard Switching Guide
Looking at the Silvies Yard switching guide we can see that the Yardmaster has responsibility for building eight different blocks.  Some of those blocks only have one tag, while some have multiple tags.  In this case the Monument block contains several tags meaning that Silvies yard can “shotgun” any cars with those tags into that block.

Minimizing the Visual Impact of the Car Tab System

A significant amount of traffic on the railroad moves from staging yard to staging yard without changing trains.  There is no need for tags on those cars.

Certain open loads have only one possible destination on the layout – there is no need for tags on those cars (essentially the load type becomes the tag).  An example is loaded woodchip cars which are all destined for the pulp mill at Scanlon.

In certain cases Dean has tried to match the tag colors with the typical roof colors for the industry served.  For instance, he uses solid silver tags for the Big Monument Industrial Park.  The largest industry at Big Monument is a fruit warehouse which gets lots of silver-roofed refrigerator cars.

By painting the sides of the tags to match the roof colors visual impact is minimized.

Most of Dean's operators are HO Scalers, but everyone seems to like the system and, most importantly, they keep coming back!  A one minute explanation is about all most people need to get up and running with the system.

The yardmasters can handle an incredible amount of traffic (compared to typical car card systems) because their eyes never leave the layout.  The classification instructions are on the cars, switches are hand throws on the layout.